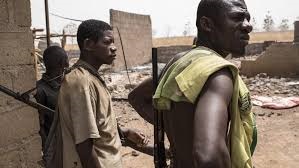 Violent conflicts between nomadic herders from northern Nigeria and sedentary agrarian communities in the central and southern zones have escalated in recent years and are spreading southward, threatening the country’s security and stability. With an estimated death toll of approximately 2,500 people in 2016, these clashes are becoming as potentially dangerous as the Boko Haram insurgency in the north east. Yet to date, response to the crisis at both the federal and state levels has been poor. President Muhammadu Buhari’s administration and affected state governments need to work together, taking immediate steps to shore up security for herders and farmers, strengthening conflict-resolution mechanisms and initiating longer-term efforts to reform livestock management practices, address negative environmental trends and curb cross-border movements of both cattle rustlers and armed herders.

Familiar problems – relating to land and water use, obstruction of traditional migration routes, livestock theft and crop damage – tend to trigger these disputes. But their roots run deeper. Drought and desertification have degraded pastures, dried up many natural water sources across Nigeria’s far-northern Sahelian belt and forced large numbers of herders to migrate south in search of grassland and water for their herds. Insecurity in many northern states (a consequence of the Boko Haram insurgency in the north east and of less-well-reported rural banditry and cattle rustling in the north-west and north-central zones) also prompts increasing numbers of herdsmen to migrate south. The growth of human settlements, expansion of public infrastructure and acquisition of land by large-scale farmers and other private commercial interests, have deprived herders of grazing reserves designated by the post-independence government of the former Northern region (now split into nineteen states).

Herders migrating into the savannah and rain forests of the central and southern states are moving into regions where high population growth over the last four decades has heightened pressure on farmland, increasing the frequency of disputes over crop damage, water pollution and cattle theft. In the absence of mutually accepted mediation mechanisms, these disagreement increasingly turn violent.

The spread of conflict into southern states is aggravating already fragile relations among the country’s major regional, ethnic and religious groups. The south’s majority Christian communities resent the influx of predominantly Muslim herders, portrayed in some narratives as an ‘‘Islamisation force’’. Herders are mostly Fulani, lending an ethnic dimension to strife. Insofar as the Fulani spread across many West and Central African countries, any major confrontation between them and other Nigerian groups could have regional repercussions, drawing in fighters from neighbouring countries.

As these conflicts increase in frequency, intensity and geographical scope, so does their humanitarian and economic toll. The increasing availability of illicit firearms, both locally-produced and smuggled in from outside, worsens the bloodshed. Over the past five years, thousands have been killed; precise tallies are unavailable, but a survey of open source reports suggests fatalities may have reached an annual average of more than 2,000 from 2011 to 2016, for some years exceeding the toll from the Boko Haram insurgency. Tens of thousands have been forcibly displaced, with properties, crops and livestock worth billions of naira destroyed, at great cost to local and state economies.

The reaction from Nigeria’s federal and state authorities, so far, has been wanting. Aside from the recent push against Boko Haram and military operations against cattle rustling, they have done little else to address rural insecurity in the north. Federal security and law enforcement agencies have established neither early-warning nor rapid response mechanisms; they have not arrested and prosecuted perpetrators of violence or offered redress to victims. Until recently, officials have paid little if any attention to improving livestock management practices to minimise friction with agrarian communities. State governments’ responses overall have been short-sighted; most have failed to encourage community-level dialogue. As a result, both herders and farmers are taking matters into their own hands, further aggravating conflicts.

ILRI's strategy 2013-2022 was approved in December 2012. It emerged from a wide processof consultation and engagement.

ILRI envisions... a world where all people have access to enough food and livelihood options to fulfil their potential.

ILRI’s mission is... to improve food and nutritional security and to reduce poverty in developing countries through research for efficient, safe and sustainable use of livestock—ensuring better lives through livestock.