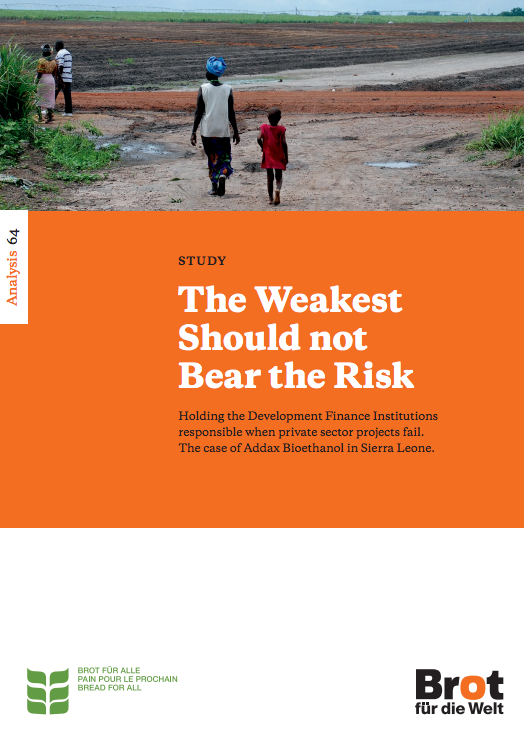 Following the financial and food crisis in 2008 the phenomenon of land grabbing through large-scale investments in land leading to forcible displacement of rural population, increasing their food insecurity and disregarding Human Rights became a hot topic on the global agenda. At the same time it became clear, that more investments were needed into the agricultural sector to increase food security and secure agricultural productivity. Under what conditions and if at all profit-oriented investments can lead to sustainable development and durable benefits for rural population is still under discussion. The most important question is which sort and form of investment is needed and by whom? Can there be responsible investment from profit-oriented investors and what are requirements for those? Who is accountable to whom, for what and for how long?

Those and similar questions are discussed locally but also on international level and led amongst other international frameworks to the Voluntary Guidelines on the Responsible Governance of Tenure of Land, Fisheries and Forests (VGGT). The VGGT were endorsed by the UN Committee on Food Security in May 2012 and are intended to lead to good governance in the land sector and responsible investments in the context of food security. The German Government is one of the strong supporters right from the beginning and actually supports the implementation of the VGGT through partnerships with different governments, amongst them the Government of Sierra Leone together with the FAO.

The international community is now monitoring the implementation of the VGGT and intends to learn from different cases in order to improve the approaches, policies and practice, as hunger is still one of the major problems worldwide, often combined with violence and fragility. Global reviews show that still 795 million people worldwide are starving and none of the fragile and conflict-affected countries of the Global South had reached one of the Millennium Development Goals. So a lot more has to be done to fight hunger, poverty and violence.

The private sector investment into the agricultural and land sector is a growing trend. But whether the cherished win-win situation between profit-orientation and sustainable poverty eradication can be reached still needs to be proven. The power-imbalance between the affected population and economically strong national or international investors and their creditors often with the backing of the government is one of the key challenges at all stages of investments projects, in the planning, the implementation, the monitoring. The locals are vulnerable and have a relatively weak position when it comes to grievances, questions about responsibility, risk management and compensation for losses and other negative side effects, damages and failures. Who is responsible, if a project fails, has a negative impact and causes harm on the ground? Experts from the field of policy, from governments and civil society as well as from the private sector and from academia are continuously searching for lessons learnt from different investment projects that are funded by private investors and/or also supported through public funding by the Development Finance Institutions (DFIs) to validate the impact of those projects and to learn from these experiences.

Together with our partner organization Sierra Leone Network on the Right to Food (SiLNoRF) we, Bread for All and Bread for the World and in former times also together with the dutch agency CordAid, have continuously monitored since 2009 the Addax-case in the Makeniregion in the North of Sierra Leone. We reported about this bioethanol-production project and its impact on the local communities until the beginning of 2016. Whereas already in mid 2015 the investor had declared to close down all major activities. Over the past years the project was seen by the Government of Sierra Leone and by some actors in the international arena as a very positive example and best practice for large-scale investments but has also been criticized. However, since the project is closed the reputation of the project and its stakeholders is increasingly under question, as the food security in the region and especially within the affected communities is worse than before the investment was planned and started. A special aspect of the Addax project in Makeni is, that a broad range of DFIs had supported the investment that was supposed to bring economic development, employment and better livelihood perspectives to the rural project area and at the same time was planned to also produce electricity for the country. Now as the investment project failed, questions arise about what went wrong, about the accountability of the different actors and about lessons learnt to improve the approaches in future.

Bread for the World – Protestant Development Service is the globally active development and relief agency of the Protestant Churches in Germany. In more than 90 countries all across the globe we empower the poor and marginalised to improve their living conditions. Key issues of our work are food security, the promotion of health and education, the access to water, the strengthening of democracy, respecting human rights, keeping peace and the integrity of creation.