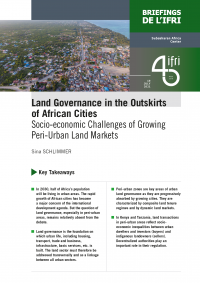 In the next 30 years, Africa’s population is expected to double, and the continent will be home to 2.5 billion people. Almost half of this population will be living in urban agglomerations. Metropolitan cities, such as Lagos, Nairobi, Dar es Salaam or Abidjan will host several tens of millions of urban dwellers. Peri-urban areas are most affected by the cities’ expansion and undergo important social, political and economic transformations.This Ifri briefing analyses how these changes translate into land governance, a key sector of urban development. It first discusses the main characteristics of land governance in peri-urban areas, before addressing the socioeconomic challenges of land markets and their regulation.

•  In 2030, half of Africa’s population will be living in urban areas. The rapid growth of African cities has become a major concern of the international development agenda. But the question of land governance, especially in peri-urban areas, remains relatively absent from the debate.

•  Land governance is the foundation on which urban life, including housing, transport, trade and business, infrastructure, basic services, etc. is built. The land sector must therefore be addressed transversally and as a linkage between all urban sectors.

•  Peri-urban zones are key areas of urban land governance as they are progressively absorbed by growing cities. They are characterized by composite land tenure regimes and by dynamic land markets.