The Namati team in Sierra Leone is engaged in an ongoing effort to discover sustainable measures for community ownership, management, and administration of land and natural resources throughout the country. To this end, we have taken on a new project: the application of a legal empowerment approach to community land protection.

Land administration in Sierra Leone has often been characterized by scholars and pundits as “chaotic and unsustainable”. This is because many of our land laws are archaic and allow for a vast disconnection between what those laws say and how they are used or implemented.  The country is in the midst of a land reformation process which will update our laws and ensure better harmonization between our formal and customary land tenure systems. As it stands now, a new land policy has been approved by the government which entails progressive provisions for the promotion of investments, as well as the protection of the respective land-owning families and others throughout the country. Efforts are currently underway by government and civil society organisations, including Namati and international partners, to ensure the progressive provisions of this policy are passed into law.

One of the recommendations of the policy is that land in every community should be demarcated, mapped, and documented with the assistance of satellite imagery or GPS. While a few organisations have attempted some form of community mapping, Namati is currently the only organisation in the country that is piloting the recommendation of the land policy in a way that combines mapping with protection of tenure rights. Community mapping is a key element of Namati’s five-part process to protect the customary land rights and natural resources of communities and indigenous citizens. 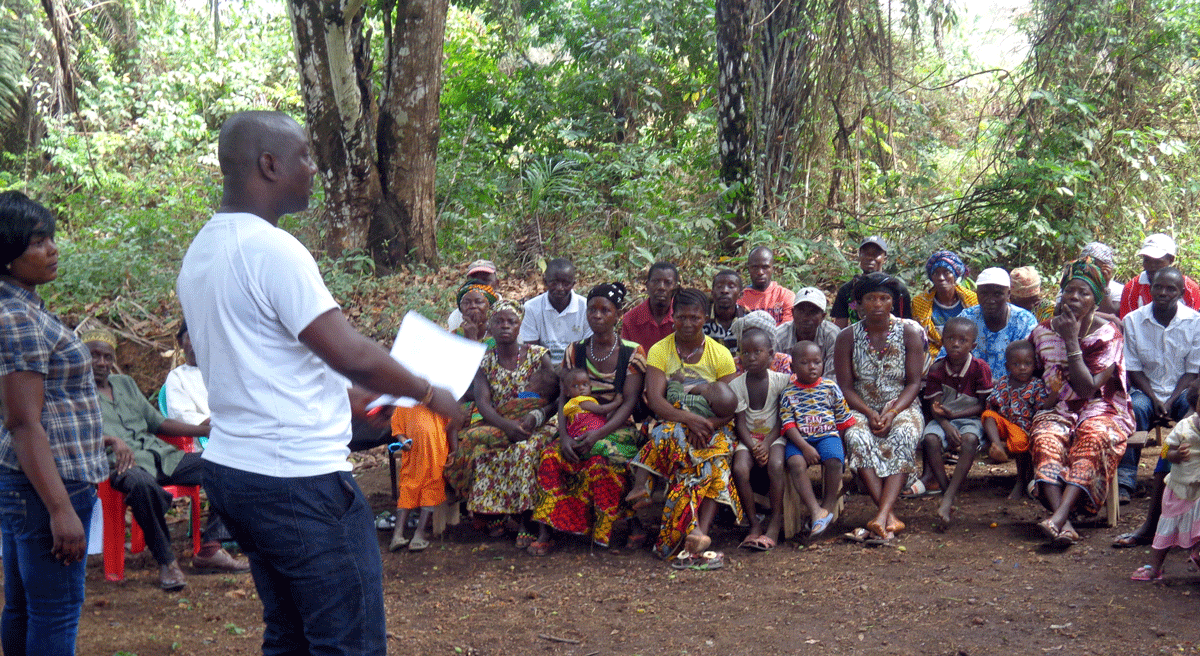 (2) To use the results of this mapping as an advocacy tool for broader reforms, specifically, to gain government approval of the community land protection process as a model for the implementation of the land policy.

Working with Namati’s global Community Land Protection team, we co-designed criteria for community selection and devised strategies for getting buy-in from the chiefdom authorities. We decided to start with a community not currently experiencing land conflict, with a very progressive or development-oriented Paramount Chief, with fewer borders with neighbours, with only a small number of land owning families, and closely located to one of our local offices. We paid particular attention to the cost effectiveness of our approach so that we could more easily win over the central government authorities. Eventually we chose Mashema Community in Paki Masangbon chiefdom, Bombali district, in the North of Sierra Leone. The community is comprised of 15 houses, with a population of 311 inhabitants.

We are only halfway to the completion of this project, but so far, the community has been able to successfully draft very good bylaws to ensure a sustainable stewardship of their land and natural resources, and preserve community cohesion.

Additionally, the village leadership of Mashema has been providing excellent support throughout this project. The village chief has given us a clear picture of what to look for as we continue with the pilot phase in two new locations. He has been very honest, respectful, and pro-active at every stage of the project. During bylaws drafting, the village chief allowed his people to freely debate and reach a consensus before offering his input, and has always supported the decisions of his people. For example, he wholeheartedly supported a decision reached that fines collected in the community should be divided on a fifty-fifty basis---50% for community development and 50% to the chief directly.

These were some of the keys to our success in working with the Mashema Community.  In a future article, we will address the challenges that arose during the process and how the paralegals worked with the community to overcome them.