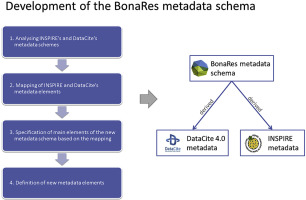 A spatial data infrastructure (SDI) for the upload and provision of soil-agricultural research data in Germany was developed and launched in 2017. The precondition for the new SDI were to be compliant with the European initiative for spatial information (INSPIRE), to consider FAIR data principles, to be interoperable with other disciplinary national and international SDIs and to support dataset registrations with digital object identifiers (DOI). To meet these requirements, the new SDI had to support both the INSPIRE and DataCite metadata standards. As there was no metadata standard available that supported both metadata schemas from different disciplines, it became necessary to merge these two existing standards.

The objective of this paper is to describe the developmental steps of the newly created BonaRes metadata schema for geospatial soil-agricultural research data. First, we analyzed the INSPIRE and DataCite metadata schemas, identified and compared semantically equivalent metadata elements, including properties and allowed content values, for potential mapping. In the next step, we specified the new metadata model, whose elements were derived from INSPIRE or DataCite under consideration of the previously developed mapping. Third, additional metadata elements were defined to directly describe the underlying data model.

The advantages and disadvantages of the method that was applied to define the BonaRes metadata schema elements originating from INSPIRE and DataCite schemas are presented and discussed. By implementing the new metadata model, the SDIs can achieve cross-portal metadata interoperability with other INSPIRE-compliant SDIs. Furthermore, researchers who store their geospatial research data in SDIs to implement the BonaRes metadata schema can increase the visibility and findability of their research, as the data can be assigned a DOI, which is a prerequisite for data citations and data publications. The new metadata elements of the BonaRes metadata schema allows targeted dataset queries, e.g., soil pH values, yields or parameters, which were measured by a specific method, using the underlying data model, and improves the discovery and reusability of research data.

The central motivation of the BonaRes Centre (Helmholtz-Zentrum für Umweltforschung GmbH – UFZ) is the transfer of existing and newly generated knowledge about soil functions into scientifically based decision support tools for soil management in the context of a sustainable bioeconomy. In future, it should be possible to make decisions on soil management options based on current scientific knowledge. This should protect soils with their diverse functions and steer their sustainable use as a bio-economic production factor.

Elsevier is a world-leading provider of information solutions that enhance the performance of science, health, and technology professionals.

All knowledge begins as uncommon—unrecognized, undervalued, and sometimes unaccepted. But with the right perspective, the uncommon can become the exceptional.