The act or process of making amends for something.

Zimbabwe is moving forward with a process to compensate former farm owners whose land was taken from them because they were white during the country’s fast-track land reform program (FTLRP).

Sergio Rojas, a leader of the Bribrí community in Costa Rica, was murdered Monday night in the indigenous territory of Salitre.

An investigation into the death is underway, and President Carlos Alvarado has called the events “a tragic day for the Bribrí people, the indigenous communities and for all of Costa Rica.”

An amendment to Myanmar’s land-ownership laws will make it nearly impossible for Rohingya refugees and Myanmar’s internally displaced to return to land they’ve tilled for generations, Peter Yeung reports.

Aboriginals in Australia have won a ground-breaking case that paves the way for billions of dollars in compensation claims for colonial land loss, as well as loss of spiritual connection.

DARWIN, AUSTRALIA - Australia’s High Court on Wednesday ruled that Aboriginal owners stripped of land rights should be compensated for “spiritual harm,” in a landmark ruling that could spark a slew of cases countrywide.

Pretoria - The government was working tirelessly to ensure that land claims by communities forcefully removed from their property as a result of apartheid-era legislation were settled swiftly and claimants received compensation, President Cyril Ramaphosa has revealed.

BANGKOK, Jan 18 (Thomson Reuters Foundation) - The Malaysian government said on Friday it would sue the local government of Kelantan state for failing to uphold the land rights of its indigenous people, a move that activists said was unprecedented and that could lead to more protection measures.

The Yomiuri ShimbunThe Japanese government intends to propose that Japan and Russia mutually abandon rights to compensation and other claims over the four northern islands during negotiations on a peace treaty, according to sources close to the bilateral talks.

Latest legal skirmish in a long battle between activists and the company building the pipeline, which is also behind Keystone XL

Politics trumps policy in the push for a constitutional amendment to expressly allow land expropriation without compensation. That much became clear at Thursday’s bruising and at times chaotic meeting of Parliament’s constitutional review committee.

The battle in the Kerio Valley illustrates global struggles to balance economic development with the land rights of local people, who lack formal titles

KERIO VALLEY, Kenya - Nathaniel Tumo was astounded when an excavator arrived at his farm in western Kenya four years ago and started digging for minerals, almost bringing down his house.

The Parliament of South Africa has agreed to amend the Constitution of the country in order to make it explicit that it is possible to expropriate land without paying compensation in order to further land reforms. The supporters of this move - the ruling  African National Congress (ANC) and the opposition Economic Freedom Fighters (EFF) – argue that this is necessary to speed up land reforms in order to overcome the continuing extreme and still largely racially defined inequalities in land ownership.

In 2018, every week more than three people were murdered, defending their land and environment from destructive industries like mining, logging and agribusiness. These killings represent the extreme end of a spectrum of violence and threats directed at land rights defenders.

Until now, a comprehensive study of national-level expropriation, compensation, and resettlement procedures in 50 countries across has not been conducted. My PhD research project, facilitated by the University of Groningen Faculty of Law, aims to bridge this gap by providing a broad comparative analysis of nation legal frameworks in 50 countries across Asia, Africa, and Latin America to determine whether legal procedures in these countries adopt internationally recognized standards on expropriation, compensation, and resettlement.

END_OF_DOCUMENT_TOKEN_TO_BE_REPLACED

On December 7-9, 2016, a group of scholars will meet in Cape Town, South Africa to discuss compensation for expropriation. The objective of the Conference is to debate what is "fair" compensation and contribute to the development of a new protocol on fair compensation.

END_OF_DOCUMENT_TOKEN_TO_BE_REPLACED 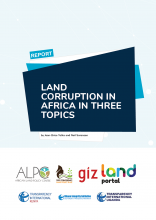 From August 22nd to September 15th 2017  the Land Development  and Governance Institute (LDGI) and Land Portal Foundation will co- facilitate an online debate that will involve the contribution of major stakeholders focusing on contemporary Kenyan land governance issues.

END_OF_DOCUMENT_TOKEN_TO_BE_REPLACED

Excellent administration and management of land for sustainable development

The legal data collected for Nicholas Tagliarino's dissertation and posted on Land Book examines whether national expropriation, compensation, and resettlement laws in developing countries are adopting international standards designed to secure tenure rights and ensure responsible land governance. The analysis conducted for this dataset is based on Section 16 of the UN Voluntary Guidelines on the Responsible Governance of Tenure, which establishes standards on expropriation, compensation, and resettlement.