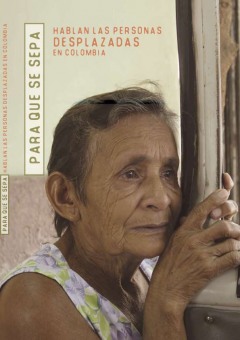 Para Que Se Sepa – in English Let It Be Known – is a compilation of life stories told by people displaced by Colombia’s years of internal armed conflict and massive human rights violations.

“In these 19 interviews, peasant farmers, Indians and Afro-Colombians relate the great drama of forced displacement which they themselves have lived. Some of them have been displaced more than once, and all have them have left behind children, brothers, dead and disappeared spouses in the journey of their flight. They were born in isolated regions, very distant from each other and, nonetheless, all the testimonies have something which identifies them: terror. To abandon one’s roots, the labour accumulated during years, one’s family and throw oneself into the abyss, is one of the most difficult torments and uncertainties that a human being can live through.”

These stories deal with the real lives of real people. Through this book and on the IDP Voices web site, the narrators share their personal experiences, their sensations, hopes and dreams, and the impact for them of being forced from their homes. Read and listen to the life stories of displaced Colombians at www.idpvoices.org.