Climate change and potential impacts on agriculture in Bhutan: a discussion of pertinent issues | Land Portal
Skip to main content 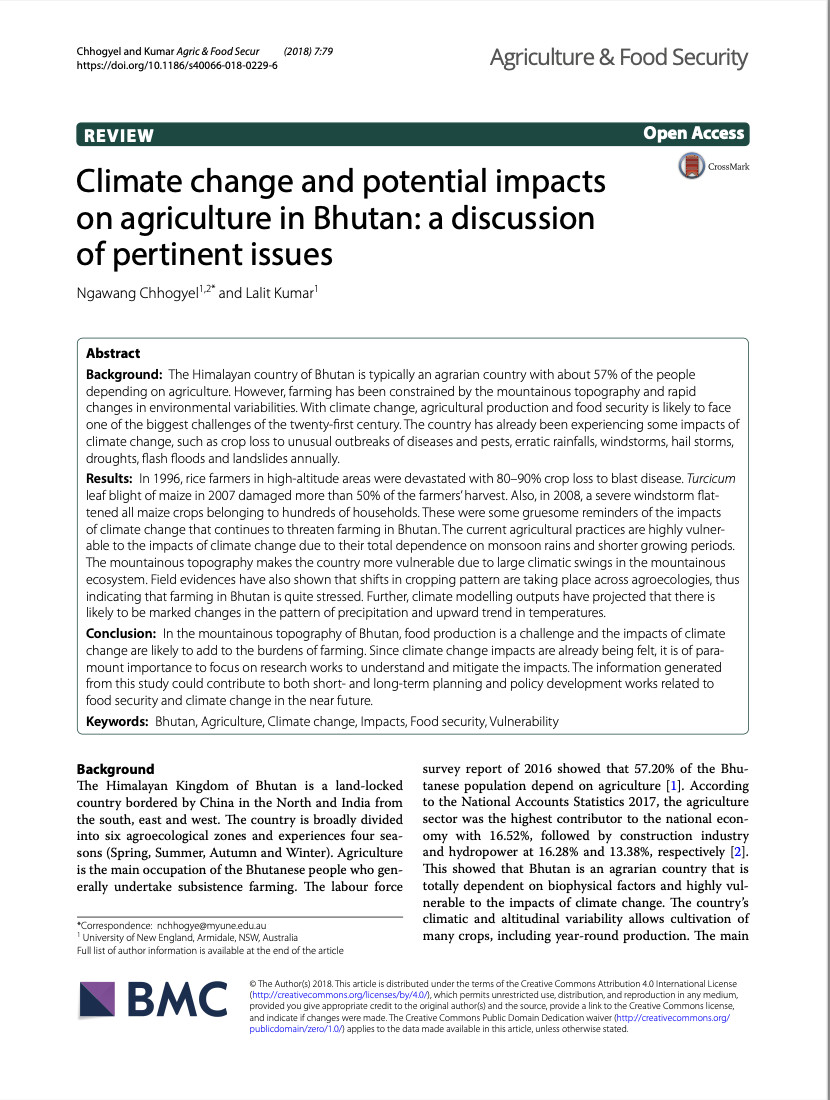 Date of publication:
November 2018
Resource Language:
English
Pages:
13
License of the resource:
Creative Commons Attribution
Copyright details:
© The Author(s) 2018. This article is distributed under the terms of the Creative Commons Attribution 4.0 International License (http://creativecommons.org/licenses/by/4.0/), which permits unrestricted use, distribution, and reproduction in any medium, provided you give appropriate credit to the original author(s) and the source, provide a link to the Creative Commons license, and indicate if changes were made. The Creative Commons Public Domain Dedication waiver (http://creativecommons.org/ publicdomain/zero/1.0/) applies to the data made available in this article, unless otherwise stated.

Background: The Himalayan country of Bhutan is typically an agrarian country with about 57% of the people depending on agriculture. However, farming has been constrained by the mountainous topography and rapid changes in environmental variabilities. With climate change, agricultural production and food security is likely to face one of the biggest challenges of the twenty-first century. The country has already been experiencing some impacts of climate change, such as crop loss to unusual outbreaks of diseases and pests, erratic rainfalls, windstorms, hail storms, droughts, flash floods and landslides annually.

Results: In 1996, rice farmers in high-altitude areas were devastated with 80–90% crop loss to blast disease. Turcicum leaf blight of maize in 2007 damaged more than 50% of the farmers’ harvest. Also, in 2008, a severe windstorm flat- tened all maize crops belonging to hundreds of households. These were some gruesome reminders of the impacts
of climate change that continues to threaten farming in Bhutan. The current agricultural practices are highly vulner- able to the impacts of climate change due to their total dependence on monsoon rains and shorter growing periods. The mountainous topography makes the country more vulnerable due to large climatic swings in the mountainous ecosystem. Field evidences have also shown that shifts in cropping pattern are taking place across agroecologies, thus indicating that farming in Bhutan is quite stressed. Further, climate modelling outputs have projected that there is likely to be marked changes in the pattern of precipitation and upward trend in temperatures.

Conclusion: In the mountainous topography of Bhutan, food production is a challenge and the impacts of climate change are likely to add to the burdens of farming. Since climate change impacts are already being felt, it is of para- mount importance to focus on research works to understand and mitigate the impacts. The information generated from this study could contribute to both short- and long-term planning and policy development works related to food security and climate change in the near future.

Agriculture & Food Security is a peer-reviewed open access journal that addresses the challenge of global food security. It publishes articles within the field of food security research, with a particular focus on research that may inform more sustainable agriculture and food systems that better address local, regional, national and/or global food and nutritional insecurity.