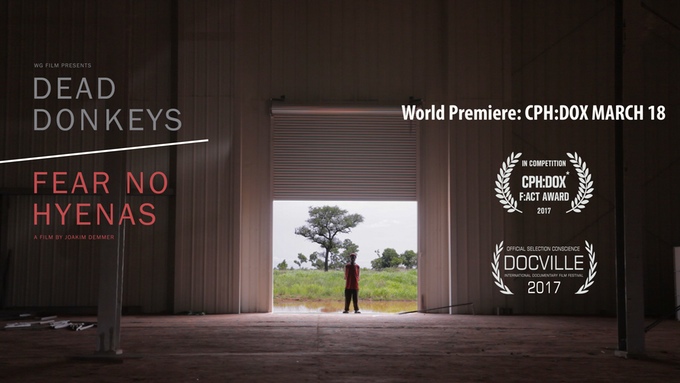 Dead Donkeys Fear No Hyenas - a documentary thriller about land grabbing and the global rush for farmland - the new green gold!

All over the world, tens of thousands of people are losing their land and livelihood because companies are stealing or buying up their ancestral land. Dead Donkeys Fear No Hyenas travels to Ethiopia, one of the countries most affected by the rush for land. In spite of persecution and punishment by the government, local people have put their safety and lives at risk in order to to tell us their stories. On March 18th, the film will have it’s world premiere at CPH:DOX (Copenhagen), where it’s up for their F:ACT Award, followed by screenings with Docville (Leuven, Belgium) in their ConScience competition, a Swedish and German cinema release and more screenings to be announced.

WHAT IS LAND GRABBING?

Imagine waking up one day by the sounds of bulldozers and then being told that you and your family are about to be evicted from the land where you’ve lived on for generations. And then, if you refuse to leave your home, being forcibly removed or put in jail.

For tens of thousands of families in Africa, Asia and Latin America, this has become the harsh reality. In the past decade, more than 81 million acres of land worldwide—an area the size equal to four times Portugal—has been sold off to foreign investors. Some of these deals are what’s known as land grabs: land deals that happen without the free, prior, and informed consent of communities. Often the result is that local farmers are being forced from their homes and families left hungry.

Foreign investors are not the only ones involved in the rush for arable land. In fact, most of us, likely without knowing it, are contributing in some way. Our pension funds, for example, are invested in agriculture and development programs worldwide. Our tax money contributes directly to this devastating development.

Around the globe, there is a massive commercial rush for farmland – the new green gold. One of the most profitable new spots for farming is Ethiopia. Hoping for export revenues, the Ethiopian government leases millions of hectares of allegedly unused land to foreign investors. But the dream of prosperity has a dark side - the most massive forced evictions in modern history, lost livelihoods of small farmers, harsh repression and a vicious spiral of violence. Contributing to this disaster are the EU, the World Bank and DFID, providing billions of dollars in development money.

Dead Donkeys Fear No Hyenas investigates these foreign land-investments and exposes their impact on people’s lives. In the pursuit of truth, we meet investors, development bureaucrats, persecuted journalists, struggling environmentalists and small farmers deprived of their land.

Kickstarter helps artists, musicians, filmmakers, designers, and other creators find the resources and support they need to make their ideas a reality. To date, tens of thousands of creative projects — big and small — have come to life with the support of the Kickstarter community.

Kickstarter is an enormous global community built around creativity and creative projects. Over 10 million people, from every continent on earth, have backed a Kickstarter project.