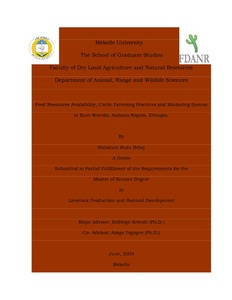 Availability of major feed resources, cattle fattening practices and marketing system were studied to generate baseline information which can be used for future interventions to develop market oriented cattle fattening program within the integrated mixed crop-livestock system. The study was conducted using cross-sectional survey by interviewing a total of 153 cattle fattener households proportionally selected from four kebeles in Weina-Dega and two kebeles in Sub- Kolla agro-ecologies of Bure Woreda in Amhara National Regional State, Ethiopia. Moreover, focus group discussions, field observations, market monitoring and heart girth measurement have been done to enrich the data. Data analyses were carried out using SAS, JMP5 statistical software. The study showed that the major feed resources available to livestock include cropresidue, stubble grazing, natural pasture and hay which varied with seasons. Mean annual total utilizable feed supply per household was 12.70 TDM. Of which, 10.77 TDM (about 84.81%) was derived from cropping system which comprised 9.63 TDM crop-residues and 1.14 TDM stubble grazing. Total utilizable DM production from cropping system per household significantly varied (P<0.05) between the two agro-ecologies that accounted for 8.05±0.59 TDM and 16.36±0.84 TDM in Weina-Dega and Sub-Kolla agro-ecologies, respectively. Among crop-residues, maize stover accounted for 64.58% and was followed by wheat, teff, and millet with 16. 82%, 6.92%, and 4.30% of the total TDM produced from cropping system including the respective stubble grazing. The study showed that average livestock population per household overall in the study area was 5.31TLU and the annual maintenance DM requirement was estimated to be 12.12TDM. Hence, the existing feed supply can satisfy about 104.79 % of the maintenance DM requirement of livestock per household. However, the annual feed supply greatly varied between the two agroecologies that accounted for about 90.84% and 119.26 % of the maintenance DM requirement of livestock in Weina-Dega and Sub-Kolla averages, respectively. As a result, feed scarcity was observed in Weina-Dega agro-ecology especially in Arbisi and Woynma-ambaye kebeles, and followed by Wndgi kebele. This study also showed that older plowed oxen about 10 years old have been fattened under farmer’s management with mean live-weight change of about 66.24kg per fattened cattle overall in the study area. However, mean live-weight changes were 53.91kg and 91.64kg for Weina-Dega and Sub-Kolla agro-ecologies, respectively. Household survey indicated that, average price of cattle before and after fattening was about 965 and 1505 birr, respectively, which resulted gross profit of about 540 birr per fattening cattle that came from price margin and feed margin over 110 days of feeding length. Both mean live-weight change and gross profit per fattened cattle in Sub-Kolla kebeles were significantly higher (P<0.05) than in Weina-Dega kebeles. Major constraints that hindered the performance of cattle fattening activity were feed shortage, lack of capital, shortage of labour, and animal health problem in order of importance. However, availability of crop-residues, high irrigation potential, better meat type cattle, and high market demand were also identified as good opportunities which could be used to enhance the performance of cattle fattening activity. It can be concluded that cattle fattening could be one potential strategy to improve the income of the farming community that utilizes seasonally available feed resources by improving utilization efficiency through training and extension advice with the help of agricultural development organizations. Moreover, detail research work on DM production, nutrient composition and digestibility of the major available feed resources are recommended for further work.

Mekelle University is found at the town of Mekelle in Tigray region of Northern Ethiopia , at a distance of 783 Kilometers from the Ethiopian capital.

Mekelle University is found at the town of Mekelle in Tigray region of Northern Ethiopia , at a distance of 783 Kilometers from the Ethiopian capital.