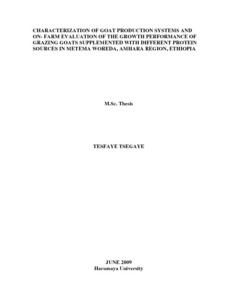 The study was carried out in Metema Woreda of Amhara National Regional State. The objectives of the study were to describe the goat production systems in the study area and to identify major constraints and opportunities of goat productivity; to evaluate the effect of supplementation with different protein sources on live weight gain of grazing goats under farmers management and to evaluate the economic feasibility of the feeding system under farmers condition. The results on production and marketing systems of this study were based on survey of 135 sample households and rapid appraisal of major goat market respectively. Following the Survey work, on-farm monitoring and feed trial were carried out. Records on birth weight, weaning weight, preweaning average daily gain and mature body weight were recorded from monitored flocks. Twenty intact male local goats owned by farmers were used for on- farm feeding trial experiment to evaluate the growth performance of grazing goats supplemented with isonitrogenous protein sources. The survey results revealed that goats were the most widely reared livestock species in the study area and the overall mean holding of goats per households was 19.7 ± 6.60. The purposes of keeping goat in Metema Woreda was to generate income followed by meat production, saving and as means of ceremony, in that order. In Metema, the genotype of goat was entirely indigenous goat types. According to the respondents, the indigenous goat type dominantly (76.3%) found is locally known as “Habesha”, and small proportions of “Rutana5.2%” and “Gumu 5.9%” goat types are also present. The major feed resource was natural pasture and source of water were from rivers, wells, natural ponds and springs. Enclosures near the fence or a separate hut for goats with a suspended wooden floor, about 0.5- 1 m above the ground, shelter were the two main methods of housing. The result revealed that uncontrolled mating within the household’s flock was predominant. In both farming systems cotton and sesame based, disease, theft and, labour were the most important goat production constraints in that order. There was neither regular market in formations on prices and supplies nor grades and standards. Animals are sold on a per head basis. The present pricing system in which agreement on price is reached by a long bargaining between sellers and buyers leaves the greater opportunities for benefiting the middlemen. The primary reason for selling of goat for the Metema goat owners was to generate money for labour wage payment followed by food crop purchase, input purchase, school fee and as means of tax in that order. Buying for consumption purpose in all market places showed a higher proportion followed by buying for profit /resale, reproduction and fattening. Regarding market composition, goats less than or equal to one year were the largest proportion in all markets and the percentage of goat sold decreased as the age increase. According to farmers’ report, the overall average age at puberty in males was 7.4 ± 1.95 and 8.2 ± 1.64 months in females. Age at first kidding and kidding interval were 13.6± xx 2.44 months and 8.4± 1.37 months, respectively. The over all average birth weight, weaning weight three months and pre-weaning growth rate were 2.28 ± 0.04 kg, 12.73 ± 0.13 kg and 115.74 ± 1.55g/day, respectively. Kids born single, male and kids from later parity were heavier (P<0.01) than twins, females, kids born from first parity. Kids born from does for the first time grew slowly and had significantly lower (p<0.01) weaning body weight and pre weaning average daily gain. Type of birth had also significant effect (p<0.01) on weaning weight but not on pre weaning average daily gain (p>0.01). The overall body weight of mature goats from above dentition class 1 pair of permanent incisor (PPI) was 32.96 ± 0.61 kg. Sex and age group had significant effect (p<0.05) and (p<0.01), respectively on live weight. Live weight significantly (at least p<0.05) increased from goat having 1PPI to 3 PPI and then showed a decreasing trend though not significant. In the feeding trial, twenty intact male Hebesha or Dega type yearling goats with average initial live weight of 22.35± 0.12 kg were used. The experimental goats were blocked into five groups of four animals each based on their initial body weight. Dietary treatments were randomly assigned to each animal in the group. Animals which were assigned randomly in each block were given to one farmer. Each farmer possessed all treatments. The treatments comprised of grazing alone (T1), grazing + mixture of 47% noug seed cake and 53% wheat bran (T2), grazing + mixture of 31% cotton seed cake and 69% wheat bran (T3) and grazing + mixture of 40% sesame seedcake and 60% wheat bran (T4). Supplemented goats attained better BW gain which were 52.9,68 and 55.1 gm/day in T2,T3 and T4,respectively than nonsupplemented ones 34.4gm/day. All the supplement feeds significantly (p<0.01) improved final weight and average daily gain of goats. The partial budget analysis showed that supplementation with noug cake ;cotton seed cake and sesame seed cake with wheat bran mixtures for Metema goat under grazing condition was not potentially profitable compared with no supplementation (grazing only). Therefore from this finding it is conclude that, even though supplementation favor better growth rate and improved body condition it was not economically beneficial compared to unsupplemented groups.

Haramaya University strives to be one of the leading African Universities with international reputation by 2025.

The Mission of Haramaya University is to produce competent graduates in diverse fields of study, undertake rigorous, problem solving and cutting edge researches,disseminate knowledge and technologies, and provide demand-driven and transformative community services.

The motto of Haramaya University is “Building the Basis for Development”

Haramaya University strives to be one of the leading African Universities with international reputation by 2025.

The Mission of Haramaya University is to produce competent graduates in diverse fields of study, undertake rigorous, problem solving and cutting edge researches,disseminate knowledge and technologies, and provide demand-driven and transformative community services.

The motto of Haramaya University is “Building the Basis for Development”