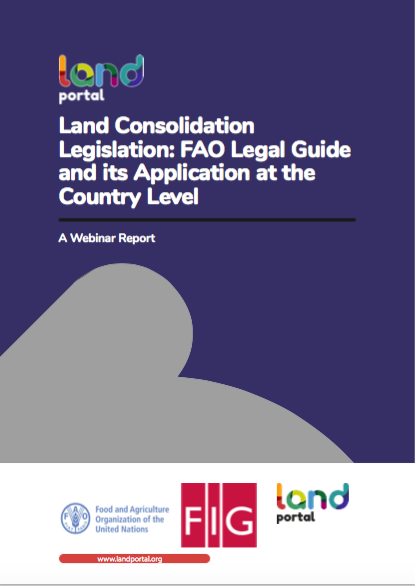 After the political changes in Central and Eastern Europe (CEE) around 1990, land reforms were in most of these countries high on the political agenda. Many CEE countries have today farm structures characterized by excessive land fragmentation and small average farm sizes. These structural problems are often hindering development of smallholder farms into commercial family farms. From the mid-1990s and onwards, many CEE countries have introduced land consolidation mainly as an instrument to address the structural problems.

This webinar served to support the application and implementation of the Voluntary Guidelines on the Responsible Governance of Tenure of Land, Fisheries and Forests in the Context of National Food Security (VGGT) and achieving SDG targets such as 1.4, 2.3 and 5.a. The objective of this discussion was to promote good land consolidation practices and the practical application of the FAO Legal Guide.

A complete recording of the webinar can be found here: https://www.youtube.com/watch?v=N-bSV28xCEY

FIG is the premier international organization representing the interests of surveyors worldwide. It is a federation of the national member associations and covers the whole range of professional fields within the global surveying community. It provides an international forum for discussion and development aiming to promote professional practice and standards.

FAO’s Regional Office for Europe and Central Asia – located in Budapest, Hungary – provides and coordinates FAO policy and technical assistance to Member Countries in the Region.

The Regional Office is also responsible for preparing the biennial FAO Regional Conference for Europe, where Member Countries establish priorities FAO’s work in the region.

Extending from Lisbon to Vladivostok and from the Arctic Circle to the Pamir Mountains of Central Asia, no region is more vast or diverse than FAO’s Europe and Central Asia region.