Growing up as member of Alberta’s Métis community, Audrey Poitras was always acutely aware of the unique struggle her people faced.

The Métis are one of Canada’s Indigenous peoples, with roots 400 years deep. But although these mixed-race people were descended from Canada’s original inhabitants and French fur traders, they were excluded from negotiations between the federal government and other Indigenous peoples. For more than a century, they had no land and no formal status.

Now president of the Métis Nation of Alberta, Poitras echoes the words of generations of previous leaders: “We’re not asking for any special treatment. We’re just saying, recognize us for who we are – as one of the Indigenous peoples of this country.”

Last week, Poitras was one of the signatories of a landmark agreement with Canada that gave the Métis nations of Alberta, Saskatchewan and Ontario the power of self-government. “It’s emotional, and it’s recognizing that all the work that our people did before is now coming to fruition,” she says.

The three agreements signed on Thursday lay the groundwork for possible future land claims, reparations and other settling of centuries-long grievances. At the emotional signing ceremony, Canada’s crown-Indigenous relations minister, Carolyn Bennett, said the government was committed to advancing the self-determination of the Métis.

“It is truly an historic moment,” says Margaret Froh, president of the Métis nation of Ontario.

Self-government enables Indigenous people in Canada to create their own constitution, as well as their own regulations on land, resources, business, culture, housing, healthcare, education and other elements that previously fell under the responsibility of federal or provincial governments.

For the Métis nation of Ontario, Froh is focused on taking the momentum and running with it. “We really have to roll up our sleeves and get down to the work of implementing the agreement,” says Froh.

“The next step for us is very deep community engagement with our citizens and start to build our constitution. We need to start [thinking], what does Métis self-government look like? What should it look like – for the next 20, 30, 50 years?” she says. The three agreements signed last week do not affect Métis living in other provinces or territories. 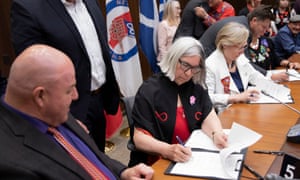 Audrey Poitras: ‘We’re not asking for any special treatment. We’re just saying, recognize us for who we are – as one of the Indigenous peoples of this country.’ Photograph: Métis Nation of Alberta

Today, there are nearly 600,000 Métis living primarily in Ontario and the Canadian west, forming nearly a third of the country’s Indigenous population. Unlike many First Nations, Métis don’t typically live on reserves; but like other Indigenous Canadians, many still face poverty, unemployment and health problems. A lack of official status has made it difficult to address these issues in any structured way.

“For Métis in Canada, our story has never really been told,” says Froh. “There’s been a name associated with the Métis: ‘the Forgotten People’.”

Canada’s Indian Act, a law first passed in 1876 and which is still in effect today, created the reserve system and gave specific rights and land access to Indigeous peoples – but not Métis or Inuit.

In western provinces, a 19th-century scrip system dissolved Métis land titles and replaced them with a voucher Métis could exchange for land or money. Many vouchers were not honoured.

The new agreements come after a protracted battle that has seen armed resistances, the birth of a province and the death by hanging of the Métis leader Louis Riel, who led two rebellions against the Canadian government. He was exiled after the first and executed for high treason after the second, in 1885. What followed was more than a century of strife for Métis people throughout the country.

Although their treaty rights were formally recognized in Canada’s 1982 Constitution Act, the Métis have long been what Froh calls a “political football” lobbed between provinces and the federal government.

“Canada has finally come to the decision – the same decision we have — about, ‘Why do we always have to go to courts to sort this out? Why don’t we sit down and negotiate?’” says Poitras. “And we have a negotiating table to do that now.”