Colombia is the second most biodiverse country in the world and around half of its land territory is forest-covered. Deforestation is one of the biggest worldwide threats not only for biodiversity but also for climate. In fact, removing trees by burning them or then letting them decompose in their entire life cycle, leads to massive carbon dioxide release currently reaching up to 10-15% of all the human greenhouse gases emissions.

In the tropics, cutting trees is mainly driven by agricultural expansion, land grabbing, illegal logging, urbanization, cattle ranching as well as mining. Those drivers depend on socio-economic and political factors. In Colombia, an important worldwide producer of minerals, mining concessions have been granted across more than 3% of the continental territory (more than 8000 mines), potentially affecting water use and quality, chemical flows to water and soils, health and human rights impacts but also forests. However, there is a global lack of studies that analyze the environmental impacts of legal mining, particularly in areas of high biodiversity.

For the first time, a new study published in Environmental Research Letters (https://iopscience.iop.org/article/10.1088/1748-9326/abfcf8/pdf) shows that deforestation rates in Colombian mining leases each year have exponentially increased in the last two decades (see Figure 1, bars indicate mining-related deforestation from ~2000 ha in 2001 to more than 20 000 ha in 2017). For instance, in the department of Antioquia, a massive gold producer, 23% of the departmental deforestation occurred in legal mines. 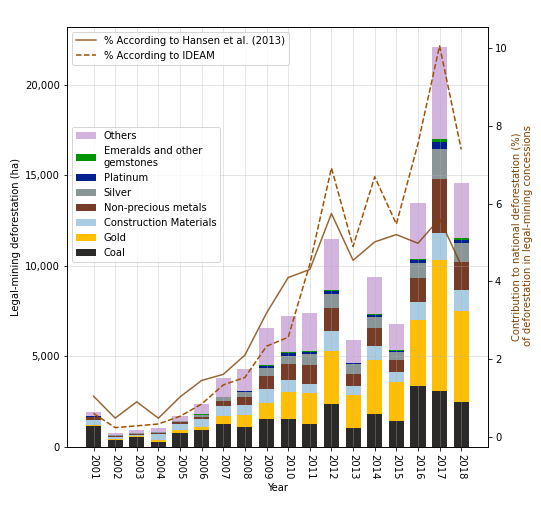 Ravaging clear cuts are particularly observed in one hundred mines where more than 400ha are deforested per mining concession, the equivalent of >500 soccer fields each. Less clear are the reasons behind this mining-related deforestation increase because gold and coal production did not vary much during the same period. Two main reasons can be put forward: (i) massive commercial logging and (ii) illegal external activities related to armed conflict.

Peace for some regions, war on forests

After the ratification of the peace agreement between the Colombian government and the FARC guerilla in 2016, large increases in gold- and coal-related deforestation are observed (yellow and black bars, respectively). Indeed, after FARC demobilization, vacui of territorial power were left, leading several groups (armed or not) to intervene in those old-conflictual zones, including some legal mining sites.

Given that in Colombia several illegal armed and non-armed groups are still operating, it is not uncommon that informal agreements are made between the concessions’ owners and these groups to let them perform mining or logging activities. Criminal dimensions in the mining sector have necessarily to be considered.

Without actions to counteract deforestation in mining leases, supposing that all newly requested mining titles would be granted (at February 2019, corresponding to 8.56% of the Colombian land territory, according to the National Mining Agency, 2019), they would add up approximately ∼400 000 ha of new legal mining zones over two decades.

Finally, accounting for carbon emissions due to deforestation in Colombian legal mines would add up ∼1/3 to the greenhouse gases emissions of the mining industry sector over the entire 2001–2018 period. To fight climate change efficiently, Colombia should crucially address this matter in the framework of its recently ambitious climate mitigation goal which aims for a 51% emissions reduction by 2030.