This story has been developed as part of Nieves Zúñiga’s 2022 LEDE Fellowship project awarded by the Solutions Journalism Network and developed in collaboration with Land Portal.

A decade ago, 15-year-old Muhammad Anas joined his father to till and plant on their 15-plot family land. There was no need to apply organic fertilisers, as their labour delivered the products of up to 50 bags of rice per harvest – an amount his father would term ‘fortune’ when he was alive.

Now 25, standing on the vast area he inherited, Anas described the days of no fertilisers as bygones. It started when his father was alive, he narrated. There was a time when the land was not producing enough and they could only apply fertilisers to make their efforts profitable. It worked. What seemed not working was that each time the fertilisers were used on the land, the soil lost particles which rendered it soft and helpless when erosion meandered through it.

Despite the fertilisers, Anas revealed, the land no longer produces up to 20 bags of rice because many parts of it are degraded, referring to the land condition that reduces its productive capacity and renders it susceptible to soil erosion.

This situation is part of an estimated 24 billion tonnes of fertile soil lost to erosion and part of the 1.9 billion hectares of land affected by land degradation globally. In 2021, the United Nations estimated that if land degradation continued, 90 percent of land areas would be degraded by 2050, causing a significant reduction in food production. 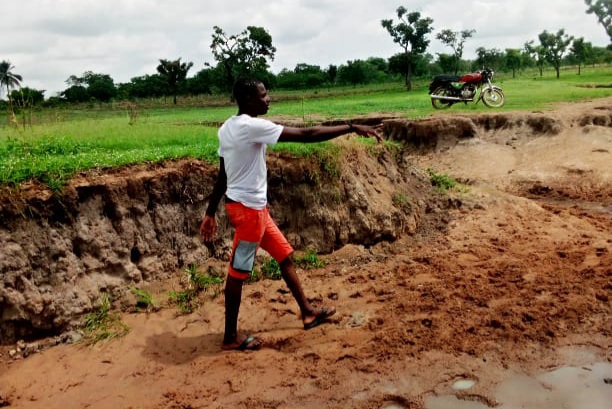 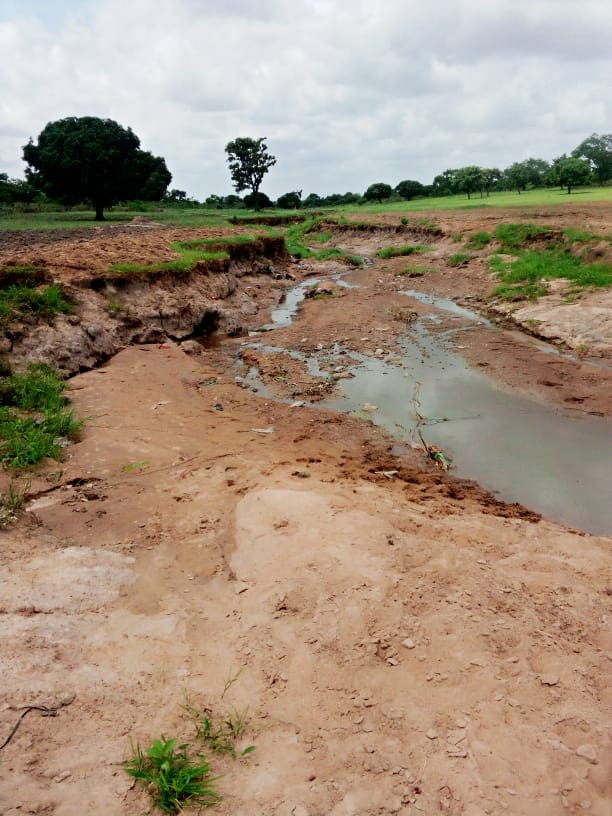 “This is part of the problem,” noted Adebowale Onafowora, a Nigerian agricultural entrepreneur who embraced hydroponics as an alternative to traditional farming. Apart from being a farmer, he trains people in hydroponics, a method of growing plants with little or no soil.

As opposed to tilling an expanse of land, hydroponics is a system of growing plants in containers like pots, jars, and tubs strategically placed on one another to minimise space and use nutrient-rich solutions.

While soil-based plants have their roots search for necessary nutrients to make them grow, hydroponic plants have nutrients dissolved in water and applied directly to the roots through flooding, misting or immersion. As a result, plants grow faster, and its soilless feature gives them zero chance of weed infestation, disease attack or soil-borne insects.

The system is estimated to occupy one-fifth of the land area traditional farming claims and uses 90 percent less water through its recycling processes. Experts argued that hudroponic plants grow up to 50 percent faster than soil-based plants when “grown under the same conditions, and the yield is also greater”.

However, crops with long roots and those in need of irreplaceable sunlight, like potatoes and corn, have proven difficult to grow with hydroponics.

“The good thing is that it is not impossible,” said Onafowora. “Just that as a farmer, I would look for vegetables and other plants that give me a more profitable yield.” 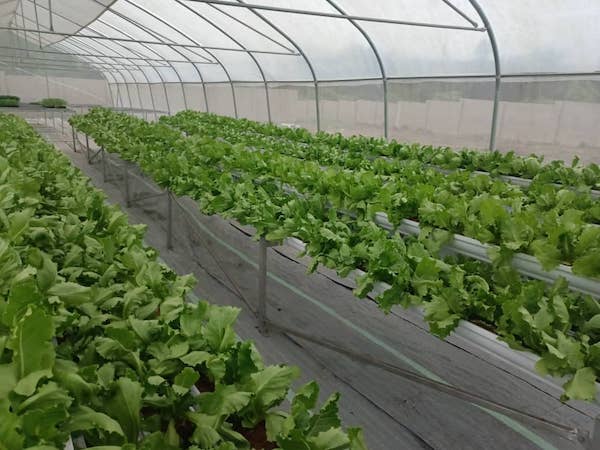 Though found in the principle that created the hanging gardens of Babylon in 600BC, hydroponics remained unpopular, if not unknown, in Nigeria until the last decade.

Onafowora became a populariser and self-acclaimed pioneer of the system in the country after discovering it in 2013 through a video he surfed online. Apart from being amazed, he said he was drawn to it because “the sight was beautiful”. Then he conducted more research.

Fascinated by his discovery, he put the knowledge he had garnered into practice and, in a couple of days, watched the roots of what he planted sink in water while stems and leaves dangled.

He said, “When I told my friend that I would make plants germinate on water, they all thought I was mad until they saw it themselves.”

Later, he teamed up with some of his friends and began spreading the knowledge of hydroponics in the country. In 2016, he travelled to Benin, a city in the country’s southwest region, to train a group of people willing to learn about the new trend. After the training, he helped a trainee set up an 8-by-12 metres hydroponics farm to grow 3.5 tons of grasses, an equivalence of 200 hectares traditional farmland. The grass was ready within nine days, and the cycle started again.

Over the last decade, he has directly trained more than 20,000 people and helped to set up over 200 hydroponic centres for his trainees across the country.

Hydroponic farming is spreading in Africa. In 2018, the World Food Programme (WFP) launched a pilot project for hydroponic crop production in Kenya’s Kakuma refugee camp. Though the project’s objective was to improve refugees’ livelihoods, it was also meant to determine the viability of hydroponics as a sustainable production method for refugee and host communities located in dry or harsh climates not suitable for agriculture.

One year later, World Bank revealed that the hydroponic systems tested at 38 sites had completed seven harvest cycles, with 74 percent of the units remaining active and productive throughout the project’s duration.

Hydroponics is becoming an important crop production technique in Africa, the report says. “For example, the system has produced animal feed in Chad and human food in Kenya, Sudan and Zambia.”

WFP claimed its H2Grow, an initiative that brings locally adaptable hydroponic solutions to vulnerable communities, reached over 72,000 people in 21 countries between 2016 and 2021.

Globally,  the hydroponics market was estimated at USD8.5 billion in 2019 and was projected to surpass USD18.5 billion by 2030.

Onafowora’s passion for choosing hydroponics was motivated by knowing that soil-based farming forms part of human activities damaging the environment. Between 2010 and 2021, Nigeria lost 96.5 thousand (Kha) hectares of its natural forest. The lost forest would have absorbed millions of tons of carbon, the major element causing global temperature rise.

But the country does not stand in isolation. Agricultural expansion in the world contributes 90 percent to global deforestation, according to the Food and Agriculture Organisation of the United Nations (FAO).

In the National Forest Policy of 2006, the Nigerian government lamented that over 20 million farmers practiced shifting cultivation, where each farmer cultivates a plot of land for two to three years and shifts to another one over the former’s depleted soil fertility. This procedure contributes 80 percent to deforestation in the country. 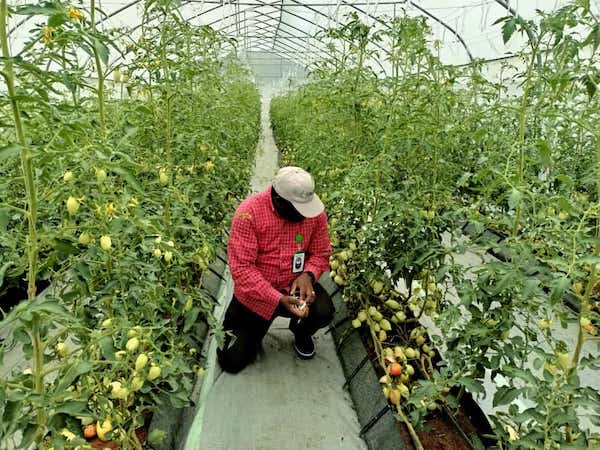 In 2021, Nigeria reviewed its National Forest Policy for the second time in two decades, the first being 2006, all in attempts to decrease deforestation. Cross River, a southeastern state where 50 percent of the country’s tropical forests are found, imposed a total ban on deforestation in 2008. Despite all efforts to effect the ban, Tony Ndiandeye, chairman of the state’s forestry commission, admitted fourteen years later that “the total ban did not succeed”.

“The government needs to change its strategy and inculcate the use of technology in agriculture,” said Onofowora.

“We have the knowledge; we have the resources which could now be accessed locally. All that is needed now is to take it to the farmers, who are unaware of the technology,” he said, referring to materials needed to set up a hydroponic farm.

Adeniyi Olayanju, a Professor of Sustainable Agricultural Mechanisation, was the vice-chancellor of Landmark University when the institution invited Onafowora to train its staff and students on the use of hydroponics in 2019. The result was the establishment of the Landmark University Greenhouse and Hydroponic Technology Centre (LUGHTEC) serving as a research and practical centre for the school’s agricultural students and staff.

“We brought Onafowora to train the trainers,” said Olayanju. “It was after they trained us that we began to train others.”

Despite its profitability, Olayanju said, lack of knowledge renders hydroponic unpopular among the farmers and those who study agricultural science in tertiary institutions. He faulted universities’ curricula in the country, which do not include the study of hydroponics.
“We can start hydroponics as a course in tertiary institutions and incorporate it in the curriculum, especially for those studying agriculture,” he said.

Since its establishment three years ago, Landmark University’s hydroponic centre has trained more than 5000 farmers across the southwestern region and the middle belt.

Olayanju believes replicating such a research centre in other tertiary institutions in the country would create an avenue to train the farmers.

He said, “Widespread use of hydroponics would cause spontaneous compliance with the forest conservation policies, drastically reduce deforestation and preserve more land.”

Because it doesn’t depend on the soil, experts claim hydroponics does not enhance living ecosystems that connect mineral soils, soil animals and the plants themselves. According to them, the process cannot rectify the land degradation caused by the soil’s organic matters lost to repetitive land tillage and burning of vegetation, and it also takes away from the soil its natural ability to heal.

Unlike hydroponics, the Food and Agricultural Organisation of the United Nations (FAO) revealed that organic farming, an agricultural process that utilises ecological solutions like organic fertilisers and cover crops has “demonstrated that it is possible to restore organic matter levels in the soil”.

“We have to admit that no solution exists without flaws,” said Olayanju. “That is why hydroponics has to be considered a complement and not an alternative form of farming.”