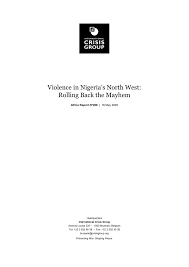 Nigeria’s arid North West is beset by violence between herders and farmers, which has been compounded by an explosion in criminal activity and infiltration by jihadist groups into the region. The last decade has seen thousands of people killed and hundreds of thousands displaced, with many fleeing into Niger Republic next door. Statelevel peace efforts with several armed factions have had some success, but these will not prove durable unless more actors lay down their weapons. To roll back the mayhem, federal and state authorities should focus on reducing tensions between herders and farmers, including by expediting implementation of the national livestock plan. They should also support dialogue between the Hausa and Fulani, the region’s two communities most closely tied to farming and herding, respectively. In addition, Abuja needs to improve security and law enforcement in the region in order to curb criminality and bolster its ability to protect citizens, as well as to step up efforts to address environmental and economic issues underlying the violence. The causes of violence in the North West are complex and inter-related. At its root, the region’s security crisis derives from long-running competition over land and water resources between predominantly Fulani herders and mainly Hausa farmers, both of whom have over time mobilised armed groups (referred to by the authorities as “bandits” and “vigilantes”, respectively) for protection. Climate change-related environmental degradation and high population growth have intensified this struggle. Amid a boom in the trade of small arms and light weapons in the region, organised gangs operating from ungoverned forests have proliferated, engaging in cattle rustling, kidnapping for ransom and armed robbery, including of miners and traders in the largely unregulated gold mining sector, as well as pillage of communities. Having originated in Zamfara state, gang violence has since spread to five other nearby states, namely Kaduna, Katsina, Sokoto, Kebbi and Niger, the last of which is in North Central Nigeria. As security has deteriorated, the region has steadily come under the renewed influence of jihadist groups, which have sometimes attacked security forces. The spike in jihadist activity in the North West has raised fears that the region could soon become a land bridge connecting Islamic insurgencies in the central Sahel with the decade-old insurgency in the Lake Chad region of north-eastern Nigeria. Security sources point to a resurgence of the long-dormant Boko Haram splinter group, Jama’atu Ansarul Muslimina Fi Biladis Sudan (Group of Partisans for Muslims in Black Africa), better known as Ansaru, which was active in north-western Nigeria between 2011 and 2014. Elements of other Boko Haram offshoots, notably the Islamic State in West Africa Province, are arriving in the area. A poorly secured international boundary, meanwhile, enables the influx of arms and facilitates the movement of jihadists to and from the Sahel, where the Islamic State has been expanding its influence. Violence has had a far-reaching humanitarian and economic impact on the region and created a domino effect of security problems. Over the last decade, more than 8,000 people have been killed – mainly in Zamfara state – with over 200,000 internally displaced and about 60,000 fleeing into Niger Republic. Livestock and crops have been decimated, further depressing human livelihood indices that were already the country’s lowest. The violence is aggravating other security challenges: it has forced more herders southward into the country’s Middle Belt, thus increasing herderfarmer tension in that region and beyond. Nigeria’s federal and state governments initially responded to the violence primarily through military and police operations, and by prescribing harsher punishments for armed attacks, but results were disappointing. President Muhammadu Buhari repeatedly charged troops with eliminating armed elements destabilising the North West, deploying soldiers and police along with air assets to the region over the course of several consecutive operations. But the state security presence on the ground remains too thin and poorly resourced to subdue the armed groups or protect communities across the vast territory. At the same time, military operations against armed groups in the region have dispersed some of them to other regions, deepening insecurity countrywide. Some state governments have more recently engaged in peace talks with herderallied armed groups, partly because these groups are perceived as the major actors in the violence. They are offering amnesties to those willing to disarm, while pledging to address herders’ grievances and needs. These concessions produced peace agreements that curbed the violence in late 2019, but with deadly incidents continuing and the region awash in arms, the sustainability of these deals is highly questionable. Durably ending the violence in Nigeria’s North West requires a multi-pronged approach, some of which must necessarily focus on the long term. The foremost priority is to encourage negotiated settlements between herders and farmers, as well as to disarm, rehabilitate and reintegrate members of their allied armed groups. In support of this effort, the federal and state governments should prioritise reforming livestock production systems in a manner that addresses the needs of both herders and farmers, and thereby minimises friction between them. Abuja should work with Niamey to improve border security to stem the flow of jihadists and weapons into the North West and strengthen its forestry departments to regulate the woods where armed groups make camp. It should also better regulate the region’s potentially lucrative gold sector, while working with international partners to address dire humanitarian needs and doing what it can to mitigate the effects of climate change in the region. This mix of short- and long-term measures is hardly guaranteed to succeed. But if vigorously pursued and well supported by international partners, it represents the best chance for staunching the spread of violence and achieving a measure of stability in a region that has already seen more than its fair share of conflict, crisis and humanitarian need.