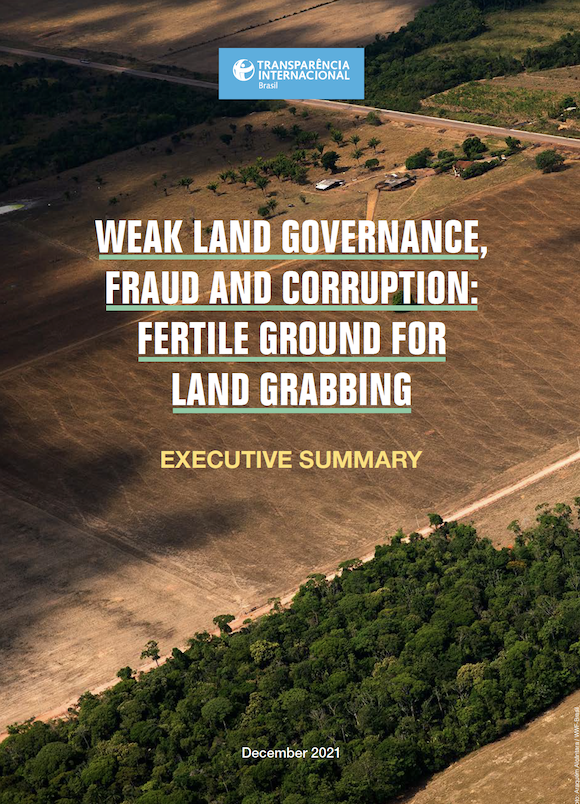 Fraud and corruption are the main enabling mechanisms for land abuses in Brazil, guaranteeing impunity for land grabbers and other public and private agents involved in these schemes. This is what is evidenced in the research report, “Weak land governance, fraud and corruption: fertile ground for land grabbing,” which systematizes for the first time the relationship between these issues. Thereby, the study seeks to understand precisely why and how corruption and fraud associated with land grabbing occur.

Land grabbing is one of the oldest and best-known crimes in Brazil. It is one of the main drivers of deforestation in the Amazon rainforest, which exacerbates the current climate crisis. Its harmful consequences directly affect indigenous peoples, traditional communities, as well as small and large rural producers who are often victims of land conflicts accompanied by threats, intimidation attempts, extortion, aggression, murder and other forms of violence. Land grabbing also damages the economy, as it affects the reputation of the sectors involved and can cause restrictions on the entry of Brazilian products into international markets, investment flight and obstacles to the ratification of trade agreements.

According to the results of the research, practices such as bribery of officials from land and environmental agencies; corrupt judicial decisions; establishment of private militias involving police officers to extort and expel the legitimate occupants of a land grabbed area; fraud in Real Estate Registries, land cadasters and land titling processes; laundering of money and assets resulting from the scheme; collusion between land grabbers and professionals such as lawyers, registry officers, notaries and real estate brokers; undue influence in decision-making processes; and policy capture are among the practices that make land grabbing possible.

The methodology of the research was based mainly on case studies of 11 operations conducted by law enforcement agencies in 8 states in the Amazon, and in regions vulnerable to land conflicts in the Northeast, to understand the strategies used by criminals. In addition to the diagnosis of corruption and fraud risks, Transparency International – Brazil mapped the loopholes in land governance and issued recommendations to curb land grabbing more effectively. Among the recommendations included in the report are proposals to improve transparency, integrity and good governance in the land management system, to strengthen land and environmental agencies at federal and state levels, as well as to mobilize anti-corruption and anti-money laundering bodies to tackle risks related to land grabbing.

Transparency International is a global movement working in over 100 countries to end the injustice of corruption.