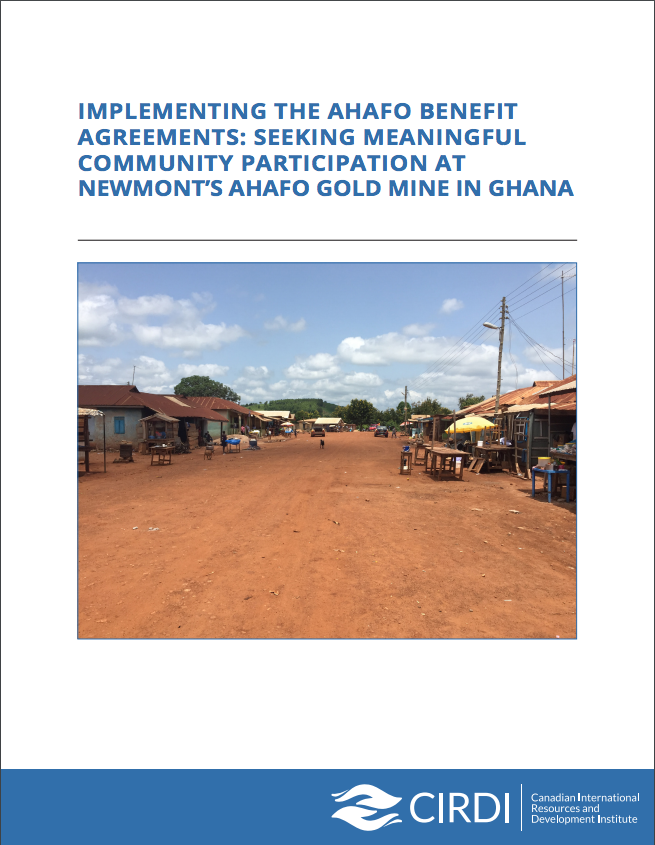 In 2008, ten communities in the Brong Ahafo region of Ghana entered into agreements with Newmont Ghana to govern company-community relations, ensure local job creation, and share the benefits of the company’s mining operations. Ten years later, this report, co-authored by Canadian International Resources and Development Institute (CIRDI), African Center for Energy Policy (ACEP), CCSI, and ISP, looks at the communities’ experience of those agreements and suggests how the agreements might be improved. Though the agreements were celebrated for their attempts to include all stakeholders in decision-making, challenges remain around representation, consultation, and participation. New entities established to facilitate multi-stakeholder decision-making have led to the replication of existing power imbalances. And despite many improvements, the agreements have not fully stabilized company-community relations; tensions and grievances remain concerning employment, compensation, and resettlement, among other issues. The report makes research-informed recommendations for the communities, Newmont Ghana, and other stakeholders in the lead-up to the renegotiation of the agreements.

While the negotiation of benefit agreements (sometimes called “Community Development Agreements”) have been the subject of wide-ranging research, academic literature on agreement implementation is still relatively sparse, and tends to focus on cases in Australia and Canada, with little information available from cases in low- or middle-income countries. This report therefore seeks to contribute to filling this gap, alongside other studies mentioned in the report.

The report was published on July 25, 2018. On that day, ACEP presented the report and a Twi-translation of the executive summary to representatives and opinion leaders from the communities. ACEP also led a workshop both on the report and on benefit agreements more generally.

The Columbia Center on Sustainable Investment (CCSI), a joint center of Columbia Law School and the Earth Institute at Columbia University, is the only university-based applied research center and forum dedicated to the study, practice and discussion of sustainable international investment.

Our mission is to develop practical approaches for governments, investors, communities and other stakeholders to maximize the benefits of international investment for sustainable development.