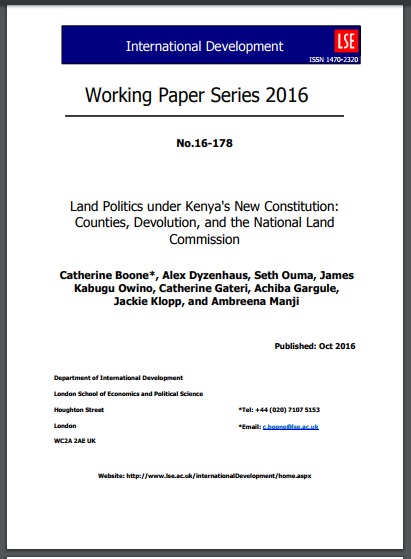 Kenya's new constitution, inaugurated in August 2010, altered the institutional structure of the state in complex ways. The general motivation behind reform was to enhance the political representation of ordinary citizens in general and that of marginalized ethno-regional groups in particular, and to devolve control over resources to the county level. In the land domain, reform objectives were as explicit and hard-hitting as they were anywhere else. Reform of land law and land administration explicitly aimed at putting an end to the bad old days of overcentralization of power in the hands of an executive branch considered by many to be corrupt, manipulative, and self-serving. 2 Kenya's 2010 Constitution and the 2012 Land Acts produced three types of institutional restructuring that were designed to touch directly on land rights and land administration: devolution to 47 new county governments would be more accountable and responsive to local interests, and directly responsible for administration of community (ex-Trust) land; separation of powers at the pinnacle of the national political system to extinguish the president's arbitrary authority to allocate land while placing oversight and regulatory authority in the hands of a non-partisan, transparent, and law-governed National Land Commission (NLC); and deconcentration of the NLC to give this nonpartisan, independent agency a strong watchdog, advocacy, and decision-making role at the local (ie., county) level. This research asks how these significant reforms are changing land control and governance in rural Kenya. The question is of acute importance for the economic and political future of both Kenya and East Africa as a region. In 2005, approximately 70% of all Kenyans lived in the rural areas, and 60% of all employment is in agriculture (WB 2009: 2, 6 [2005 data]). Today, an estimated 65% live in the rural areas, and agriculture accounts for 30% of GDP. Land pressure is acute for smallholders and pastoralists, due to a vector of forces that includes a long history land grabbing on the part of the rich and powerful, starting with colonial expropriations in the early 20th century and continuing under successive postcolonial regimes, demographic pressure on the land, rising land values, forest destruction and conservation, wildlife conservation efforts, and the slow growth of non-farm rural livelihoods and jobs. Since the 1980s, the process of land accumulation on the part of the ruling elite has been matched by progressive immiseration of the ordinary farmers, pastoralists, the rural landless, and the urban poor.3 There is much in Kenya's new constitution and the Land Acts that aimed to have a direct impact on the land interests of ordinary citizens. Constitutional reforms gave devolved county governments and the NLC new powers over untitled land (over 60% of all land in Kenya), land held under title by family farmers, public land in rural areas, and pastoralists' land, as well as powers aimed to curb rural "land grabbing" and even recover land grabbed in the past. The Constitution and the Land Acts thus set the stage for a contentious politics of institution-building and reform that would be shaped by conflicts of interest and powerstruggles. Struggles unleashed in the implementation of these progressive reforms could answer questions -- and raise new ones -- about the politics of devolution, and land politics, in Kenya. The study adopts a subnational perspective, leveraging in-county variation in an attempt to understand how struggles around the supposedly non-partisan powers of the NLC and the CLMBs would be shaped by the partisan, center-periphery, and ethnic factors that previous scholars have identified as salient in understanding the politics of devolution in Kenya. Focusing on eight counties that capture much of the partisan, ethno-regional, and economic diversity of Kenya's new counties, we sought to probe the explanatory power of existing arguments (theories) of the politics of devolution.4 The passing of key implementing legislation was stalled, the NLC and the executive branch were locked in bitter turf-wars, the NLC was under court challenge, and powerful groups had introduced new legislation to undo key provisions of the new land dispensation. The county-level case studies show how the old and new land powers of government were being used in a context of open conflict over both institutional structure and process. Part I reviews existing scholarly work on devolution in Kenya to extract four distinct (but notmutually exclusive) hypotheses about how devolution could transform the nexus between land and politics. Part II shows that the NLC 's powers have been reduced by bureaucratic obstructionism and executive branch claw-back. In Part III, the county cases show that the history of land use/politics/tenure in each county goes far in determining the salience of land issues in defining political alliances/cleavages between the county government, the national government, and the NLC. The case studies show that the use of the NLC's powers at the county level have been largely subordinated to larger political logics. Part IV returns to the four hypotheses outlined in the first part of the paper. The conclusion summarizes and draws implications for devolution.

LSE is one of the world’s leading social science universities. We have committed to a strategy that will build on our strengths, address challenges and maintain our worldwide reputation for excellence.

We have already achieved many of the goals set out in our 2014 review, including:

MISSION: To contribute to improved livelihoods through offering a bridge between communities, stakeholders and policy makers in the promotion of equitable access and sustainable management of land and natural resources.

VISION: To become a centre of excellence in promoting the application of appropriate land policies, laws and management practices by empowering society through innovative and knowledge based advocacy and capacity building in Kenya and the region.

LDGI values of Integrity, Trust and Professionalism influence the way we work every day and everywhere.