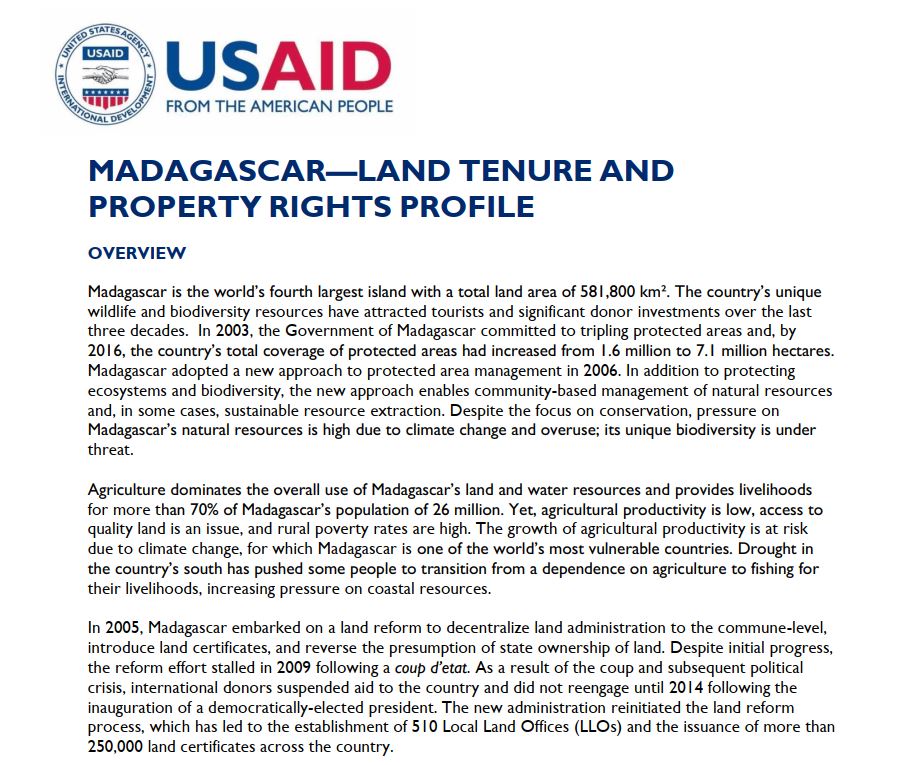 Madagascar is the world’s fourth largest island with a total land area of 581,800 km². The country’s unique wildlife and biodiversity resources have attracted tourists and significant donor investments over the last three decades. In 2003, the Government of Madagascar committed to tripling protected areas and, by 2016, the country’s total coverage of protected areas had increased from 1.6 million to 7.1 million hectares.Madagascar adopted a new approach to protected area management in 2006. In addition to protecting cosystems and biodiversity, the new approach enables community-based management of natural resources and, in some cases, sustainable resource extraction. Despite the focus on conservation, pressure on Madagascar’s natural resources is high due to climate change and overuse; its unique biodiversity is under threat.Agriculture dominates the overall use of Madagascar’s land and water resources and provides livelihoods for more than 70% of Madagascar’s population of 26 million. Yet, agricultural productivity is low, access to quality land is an issue, and rural poverty rates are high. The growth of agricultural productivity is at risk due to climate change, for which Madagascar is one of the world’s most vulnerable countries. Drought in the country’s south has pushed some people to transition from a dependence on agriculture to fishing for their livelihoods, increasing pressure on coastal resources.In 2005, Madagascar embarked on a land reform to decentralize land administration to the commune-level,introduce land certificates, and reverse the presumption of state ownership of land. Despite initial progress,the reform effort stalled in 2009 following a coup d’etat. As a result of the coup and subsequent political crisis, international donors suspended aid to the country and did not reengage until 2014 following the inauguration of a democratically-elected president. The new administration reinitiated the land reform process, which has led to the establishment of 510 Local Land Offices (LLOs) and the issuance of more than 250,000 land certificates across the country.The political crisis, rising food prices, and multiple climate shocks, including cyclones, prolonged droughts,and a locust invasion in 2013 have slowed economic growth in Madagascar and contributed to increased poverty. These crises have negatively affected the country's economic development. Despite Madagascar’s abundance of natural wealth, the country is among the poorest in the world and around 92% of all Malagasy households live in poverty.