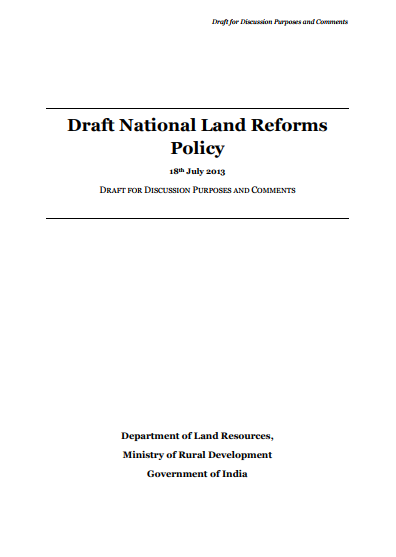 Date of publication:
July 2013
Resource Language:
English
Pages:
36
License of the resource:
Creative Commons Attribution
Copyright details:
This materials may be reproduced free of charge in any format or media without specific permission subject to accurate reproduction and not used in derogatory manner or in misleading context. The source must be prominently acknowledged. Permission to reproduce this material does not extend to any material on this site, which is explicitly identified as being the copyright of the third party and authorization must be obtained from the copyright holders concerned.

Chiefly an agricultural society, India has a strong linkage between land and social status of an individual. Nearly 70 % of its population dependent on land, either as farmers or farm laborers and it is imperative to address the issues of land ensuring livelihood, dignity and food security to millions of Indians. Land reform was a major policy initiative in the country in 1950s and early 1960s. But after abolition of Zamindari and Proprietary Rights, other measures like non-implementation of ceiling on land holdings in true spirit (except in states like West Bengal, Kerala and Jammu & Kashmir) and surplus land distribution to the poor caught up under prolonged litigation. The way of land use in recent years raises several issues and made land reform much more relevant today than ever before. The increasing demand of land acquisition for housing, industrialization and several other purposes; diversion of agricultural land for non-agricultural uses; the stagnating agricultural yields and the empirical evidence on the utility of small farms, etc. needed to revisit land reform.

More notably, inequitable distribution of benefits from the new land use, insufficient quantity of compensation, and poor rehabilitation leading to massive discontent among the affected people and ultimately led to social unrest and violence in parts of the country. Increasing share of women in agricultural labour and other farm activities also entail policy strategy to address women’s access and land holding rights.  Hence, realizing the urgent need of addressing the critical issues related to land at this juncture, the Draft National Land Reform Policy 2013 was drafted by Government of India. This policy would include Tehsil, District, Region and State level master plans, clear delineation of areas unfit for agricultural use (to keep reserved for industrial and other non-agricultural purposes), obviate and minimize the need for acquisition of land that gives rise to displacement, landlessness and unrest. The policy also outlines a very clear strategy of creating a large pool of land so that every family's right to land is fully honored, equitable method of allotting land on priority to the marginalized, especially marginalized women and provisions made on common property resources to supplement the needs of the poor and deprived. The draft focuses on tilting the balance in favor of landless and poor, mechanisms of preparing a land use plan for every villages to guide the best utilization of each and every parcel of land, putting in place policies and systems for ensuring effective distribution of land to landless poor, protecting them from losing their lands, restoration of alienated lands, effective safeguards for lands of the Scheduled Castes and Scheduled Tribes, ensuring homestead rights, tenancy rights, land rights for the women and effective usage of common property resources. It stresses to improve the delivery system with regard to litigations and putting the support systems in place for the poor for effectively liaisoning with the land administration department. This policy would meant for all States of India with exception of the North-Eastern States.

The Indus Valley civilization, one of the world's oldest, flourished during the 3rd and 2nd millennia B.C. and extended into northwestern India. Aryan tribes from the northwest infiltrated the Indian subcontinent about 1500 B.C.; their merger with the earlier Dravidian inhabitants created the classical Indian culture. The Maurya Empire of the 4th and 3rd centuries B.C. - which reached its zenith under ASHOKA - united much of South Asia. The Golden Age ushered in by the Gupta dynasty (4th to 6th centuries A.D.) saw a flowering of Indian science, art, and culture.

NRMC is a technical and managerial advisory firm in the development sector that provides evidence-based solutions for sustainable, equitable and inclusive development.

Established in 2004, NRMC is engaged in creating impactful solutions that make a difference to the society. We achieve results at scale by catalyzing partnership with clients and communities. We believe in ethical business, nurturing talent to be courageous to push the limits of knowledge and discovering new ways of doing things.