Africities is the United Cities and Local Governments of Africa’s flagship pan-African event that is held every three years in one of the five regions of Africa. We mobilize communities and local authorities in African countries, as well as financial institutions, civil society groups and development partners at continental and international level. 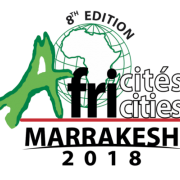 The architecture of all Africities Summits aims to address major questions based on the construction of the 2063 Vision of Africa with debate proposed by the African Union Commission.

From November 20 -24, 2018, the Africities 8 Summit will be hosted in Marrakesh, with over 5000 participants. The latter will represent all the stakeholders of African local life as well as their partners from other regions of the world: ministers in charge of local governments; ministers in charge of housing and urban development; ministers of public service; local authorities and local elected officials; officials of local and central administrations; civil society organizations, associations and trade unions; economic operators of the public and private sectors as well as of the social/ solidarity economy; traditional rulers; researchers and academics; and international cooperation agencies.

The Africities 8 Exhibition will host between 400 – 500 exhibitors.