Comparative perspectives from across the SADC development community

The Sustainable Development Institute (SDI), Landesa, and the Land Portal Foundation are co-facilitating an online discussion on Liberia's Land Rights Bill (LRB) that may soon be voted on by the Liberian National Legislature. 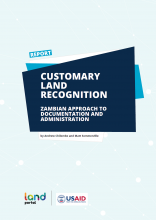 From June 20th to July 14th, 2017, the Land Portal, in collaboration with GLTN/GLII, Land Alliance and LandAC, will co-facilitate a dialogue through which a variety of stakeholders will focus on discussions centered around measuring the perception of land tenure security in the context of the Sustainable Development Goals (SDGs).

From 13-27 February 2017, the Mekong Region Land Governance (MRLG) project and the Land Portal co-facilitated an online dialogue on the Recognition of Customary Tenure in the Mekong Region.

Generally, most rural land in the world has been in the hands of local peasant communities and indigenous peoples under customary land tenure systems; historically although, land ownership in rural areas, and natural resources contained in it, have been a source of tension between different actors with different ways to understand and take ownership. In this conflict of interest, usually rural and indigenous communities with collective forms of property, have lost out.

Landscape restoration creates opportunities for securing the land and natural resource rights of local land users as well for improving soil health, sequestering carbon, and enhancing biodiversity. In order to achieve synergies between these interrelated aims, restoration practitioners must carefully consider how projects are managed, particularly with regard to supporting equity in project design and planning—the focus of this blog.

Indigenous Peoples globally have high exposure to environmental change and are often considered an ‘‘at-risk’’ population, although there is growing evidence of their resilience. Ample research illustrates that Indigenous Peoples are actively observing and adapting to change in a diversity of ways.

Join the Ford Foundation, the Land Portal Foundation, the Tenure Facility and the Thomson Reuters Foundation for a webinar on May 20th. The link between “environmental imbalances” and “emerging infectious diseases” is well established in literature; studies have shown that activities associated with deforestation, and subsequent biodiversity loss, contribute to the spread of disease v

Comparative perspectives from across the SADC development community

END_OF_DOCUMENT_TOKEN_TO_BE_REPLACED

Our vision is of a self-reliant society in which people have equitable access to resources and institutions are an expression of people’s needs and aspirations.

The Alianza Territorial Mapuche (PuLofMapuXawvn ) is one of the grassroots organizations based in Gulu Mapu, the Chilean side of Wallmapu. The ATM’s core mission is the full defence of the Mapuche’s inherent rights, especially concerning the protection of their territory and natural environment. ATM is similar to an NGO in the sense that the organization is not registered under Chilean law. The ATM covers different territories of the Mapuche Nation and is involved in several communities that feel they represent the spirit of the organization.

Membership of the APA is made up of Units throughout the country, currently amounting to close to eighty such units. The Association is led by an Executive Committee comprising the President, Vice-President, Secretary, Treasurer, Assistant Secretary/Treasurer, thirteen regional representatives, a women’s representative and a youth representative.

Anagrasar Samaj Unnyan Songstha (ASUS) was started on 1998 as a non profitable and non political voluntary organization to provide support to the Indigenous people of plain land in Bangladesh. It was established to promote rights of the Indigenous Community and their empowerment. It has strong experiences in group approach, community participation, training on different areas of development, mass awareness creation in the field of the land rights, child rights, labor rights, water & sanitation, health and hygiene, recovery of Indigenous culture.

The Asian Indigenous Women’s Network wants to support, sustain and help consolidate the various efforts of indigenous women in Asia to critically understand the roots of their marginalized situation and to empower themselves by becoming aware of their rights as women and as indigenous peoples, and by developing their own organizations or structures for empowerment.