From 6-18 November, Egypt will host the COP27 Climate Summit. This year marks the 30th anniversary of the adoption of the UN Framework Convention on Climate Change. Despite this long trajectory and the progress made, climate change has increasingly severe effects across the world. The LAND-at-scale program acknowledges the central role of climate change. In a short series of blogs, the knowledge management team highlights the diverse impact that climate change has on communities across the world, and how LAND-at-scale projects contribute to adaptation and mitigation measures on the ground. In this blog we talk to Berta Rafael, Gender and Climate Change Officer with CTV, the LAND-at-scale partner in Mozambique.

LAND-at-scale in Mozambique works in a number of geographic locations across the country. How has climate change affected the communities in these different locations?

Climate change is a fact in Mozambique given the geographical location of this country which places it in a position of vulnerability. The most recorded effects in communities are prolonged drought, floods, strong winds and cyclones jeopardizing livelihoods due to low production and productivity. Crops are destroyed due to flooding or lack of water, and livestock die of hunger and thirst. 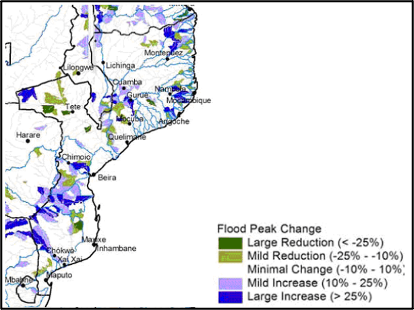 Floods and cyclones cause families to move, abandoning their productive land, and houses. Families who remain are deprived of basic services such as drinking water, education, health, and roads due to the destruction of infrastructure such as schools, health posts, bridges, and roads.

One of the objectives of the LAND-at-scale intervention in Mozambique is “climate-resilient land governance”. Can you tell us what this means?

For us, climate-resilient governance means supporting the country to prepare planning instruments that integrate climate change issues. We do this through promoting debates on climate change concepts, causes and effects, and capacity building at all government levels. We also assist in the identification of local climate change adaptation and mitigation measures. Climate-resilient land government means that the government, the private sector and communities become aware of the need to implement projects that lead to climate resilience, actions that lead to reduced vulnerability from individual households to the country as a whole. It means equipping people with capacities for response and preparedness.

Climate-resilient land governance is still in its infancy in Mozambique. During the inception phase, we found that none of the districts we visited has integrated a climate resilience component in their land-use plans. Those climate resilience measures formulated by government institutions were all reactive measures such as the resettlement of victims from the flooding caused by cyclone Idai in 2019. Where natural disaster mitigation plans are available, the capacity of district governments to implement these measures is very weak.

At community level, climate adaptation actions are very limited. For example, in Gaza province communities located along the Limpopo River have gained experiences in addressing floods over the years. But the community members have mainly resorted to building houses on higher grounds as preventative measure against future floods.

How does the LAND-at-scale intervention aim to achieve this objective of climate-resilient land governance?

At district and community level, we support District governments in the improvement and updating of land use plans to consider areas prone to droughts, floods, and erosion. These land use plans must integrate aspects of climate change by indicating the different types of land use according to the characteristics of each location. Through such an approach the resettlement of people on marginal, unproductive land, or in places prone to flooding will be avoided. Another important climate-related aspect in drawing up land use plans is the identification of activities that represent mitigation and adaptation measures. Working together with the local governments and communities, recommendations are made, such as the reduction of indiscriminate felling of trees and uncontrolled burning.

Within the LAND-at-scale intervention, capacity building on climate change issues for members of governments, communities and civil society organisations and emphasizing the need for sustainable land use planning is a core activity. This is combined with para-legal training and community land registration. These components jointly work to increase awareness and strengthen capacity at local level to deal with and implement land governance practices to mitigate and adapt to climate change.

What is the main outcome you want to see from the upcoming COP27 and why?

For us, we want to see discussion on actions how industrialised country will effectively reduce their greenhouse gas emissions. And we want greater adherence of countries to the COP27 agreements, especially the most polluting ones.