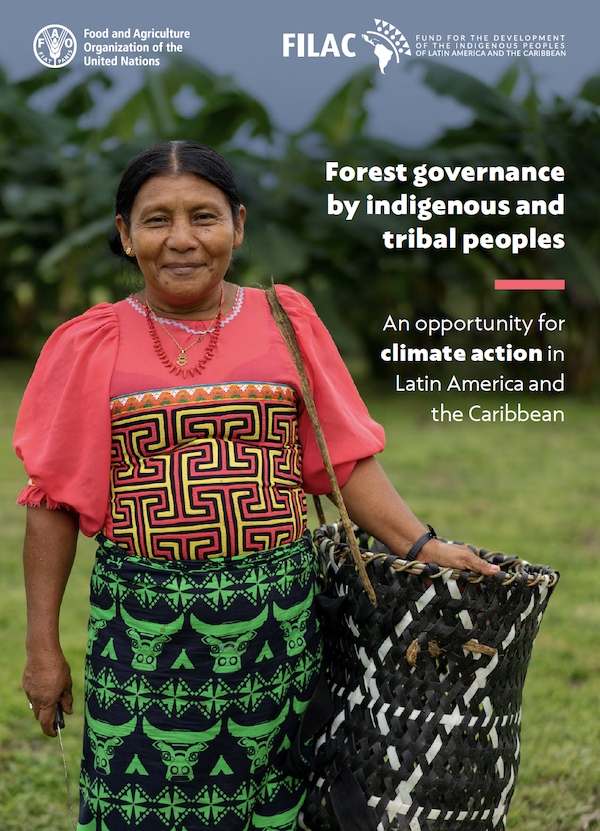 This report highlights the importance and urgency for climate action initiatives of protecting the forests of the indigenous and tribal territories1 and the communities that look after them. Based on recent experience, it proposes a package of investments and policies for climate funders and government decision-makers to adopt, in coordination with the indigenous and tribal peoples.

The indigenous and tribal peoples that inhabit Latin America and the Caribbean’s forest regions find themselves in a paradoxical situation. Despite being rich in natural and cultural resources, they are poor in monetary incomes and access to public services. This report addresses both aspects. It proposes measures that take advantage of indigenous and tribal peoples’ natural and cultural riches to mitigate and adapt to climate change and protect wildlife and biological diversity, while reducing extreme poverty, food insecurity and social conflict.

The COVID-19 pandemic makes such measures more urgent than ever. The indigenous and tribal peoples are among the groups most affected by the virus and its economic impacts, and the pandemic underscores how forest destruction and biodiversity loss can fuel zoonotic diseases that put human lives at risk.

Forests are extremely important for climate stability because it would be extremely difficult to limit the rise in average global temperatures to less than 2 degrees Celsius above pre-industrial levels without conserving and restoring the world’s forests (Houghton et al., 2017). Practically all scenarios for achieving this  goal include some combination of reducing deforestation and forest degradation, reforestation, and natural forest regeneration (IPCC, 2018), the main “climate actions” discussed in this report.

In this context, the forests of Latin America and the Caribbean’s indigenous and tribal territories are key for global, regional, and local climate mitigation and resilience.3 They contain almost 30 percent of the carbon of the region’s forests and 14 percent of the carbon in tropical forests worldwide4 (Saatchi et al., 2011;

Besides being great warehouses of carbon, forests also matter for the climate because they affect the temperature and rainfall patterns in other ways. Forests have higher evapotranspiration, greater surface roughness, and lower albedo than other land uses, and that has major effects on local temperatures and both local and distant rainfall patterns (Ellison et al., 2017; Sheil, 2018; IPCC, 2019). Extensive forest cover can help to prevent extreme temperatures and changes in rainfall patterns, and thus maintain agricultural yields, avert heat stress, and prevent forest fires associated with droughts (Costa et al., 2019; Suter et al., 2019).

Historically, forests in indigenous and tribal territories have suffered much less destruction than the region’s other forests. Nevertheless, several factors that protected these forests have weakened, and threats to these forests and their inhabitants are growing rapidly. To reverse these negative trends requires various measures, which can be grouped in five categories:

These measures offer an excellent opportunity to markedly reduce carbon dioxide in the atmosphere at a low cost per ton of avoided emissions, as well as generate other relevant environmental and social benefits. A holistic package of reforms and investments that incorporates these elements could contribute greatly to achieving many Sustainable  Development Goals (SDGs) and targets of the Paris Agreement, and the 2030 Agenda.

The report begins by analyzing the forests in the territories that indigenous and tribal peoples manage communally and their importance for climate action. Then, it tackles the reasons those forests have been better conserved than other forests in the region. Thirdly, it studies the new dynamics accelerating these forests’ destruction threatening indigenous and tribal peoples.

Finally, we propose a package of policies and reforms to reverse these trends, with emphasis on five types of interventions. It is worth mentioning that this report centers on indigenous territories with significant forest cover. It also includes evidence about afro-descendants who could be considered “tribal” under international standards (Dulitzky, 2005).

The report is based primarily on a review of over 300 studies published in the last two decades, including 73 studies published in the last two years (2019 and 2020). Hopefully, it will pique the interest of decision-makers and professionals who work in government agencies, grassroots organizations, international organizations, academic centers, and non-governmental organizations (NGOs) related to climate and forest policies and to land tenure and the rights of indigenous and tribal peoples.