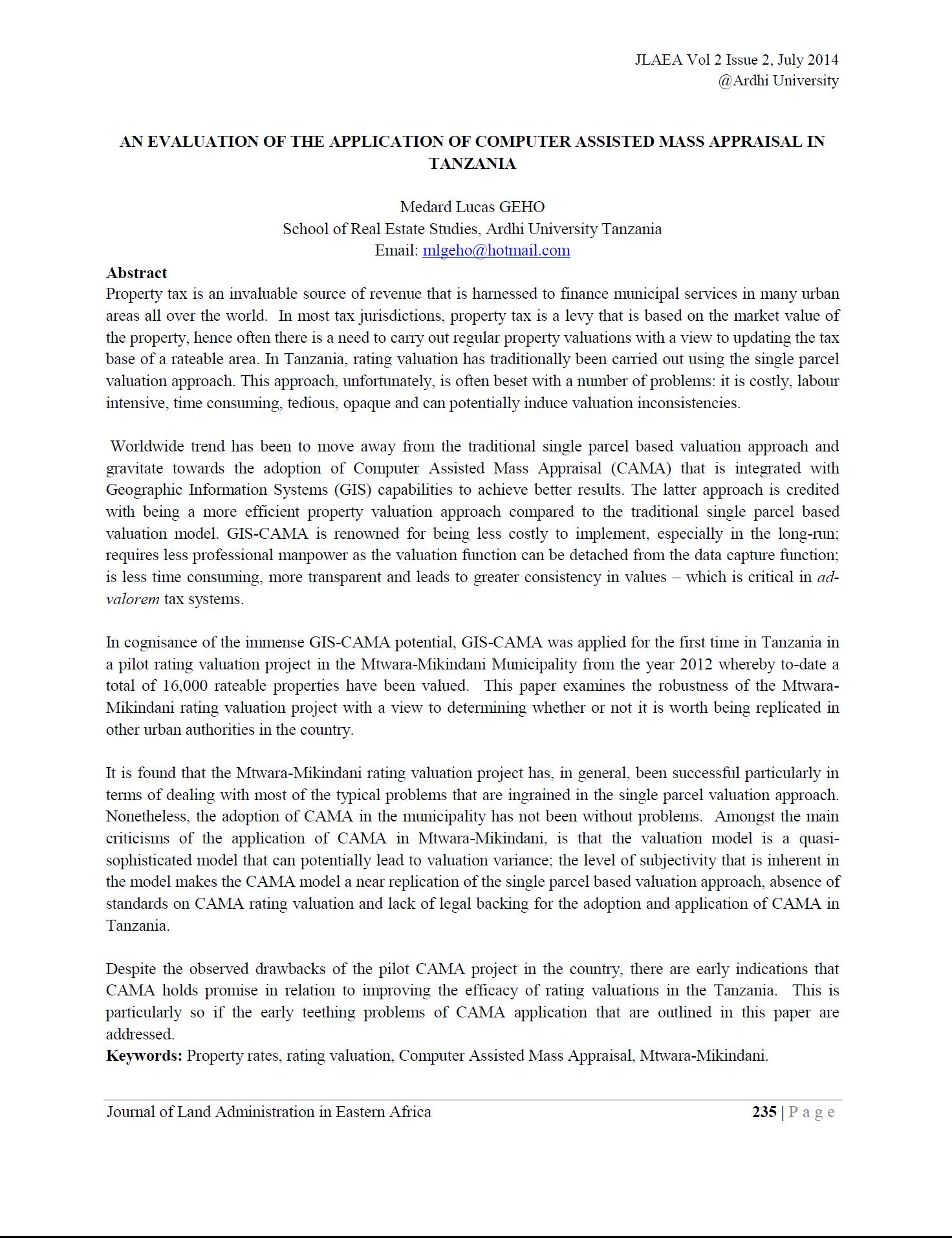 Property tax is an invaluable source of revenue that is harnessed to finance municipal services in many urban areas all over the world. In most tax jurisdictions, property tax is a levy that is based on the market value of the property, hence often there is a need to carry out regular property valuations with a view to updating the tax base of a rateable area. In Tanzania, rating valuation has traditionally been carried out using the single parcel valuation approach. This approach, unfortunately, is often beset with a number of problems: it is costly, labour intensive, time consuming, tedious, opaque and can potentially induce valuation inconsistencies.

Worldwide trend has been to move away from the traditional single parcel based valuation approach and gravitate towards the adoption of Computer Assisted Mass Appraisal (CAMA) that is integrated with Geographic Information Systems (GIS) capabilities to achieve better results. The latter approach is credited with being a more efficient property valuation approach compared to the traditional single parcel based valuation model. GIS-CAMA is renowned for being less costly to implement, especially in the long-run; requires less professional manpower as the valuation function can be detached from the data capture function; is less time consuming, more transparent and leads to greater consistency in values – which is critical in advalorem tax systems.

In cognisance of the immense GIS-CAMA potential, GIS-CAMA was applied for the first time in Tanzania in a pilot rating valuation project in the Mtwara-Mikindani Municipality from the year 2012 whereby to-date a total of 16,000 rateable properties have been valued. This paper examines the robustness of the MtwaraMikindani rating valuation project with a view to determining whether or not it is worth being replicated in other urban authorities in the country.

It is found that the Mtwara-Mikindani rating valuation project has, in general, been successful particularly in terms of dealing with most of the typical problems that are ingrained in the single parcel valuation approach. Nonetheless, the adoption of CAMA in the municipality has not been without problems. Amongst the main criticisms of the application of CAMA in Mtwara-Mikindani, is that the valuation model is a quasisophisticated model that can potentially lead to valuation variance; the level of subjectivity that is inherent in the model makes the CAMA model a near replication of the single parcel based valuation approach, absence of standards on CAMA rating valuation and lack of legal backing for the adoption and application of CAMA in Tanzania.

Despite the observed drawbacks of the pilot CAMA project in the country, there are early indications that CAMA holds promise in relation to improving the efficacy of rating valuations in the Tanzania. This is particularly so if the early teething problems of CAMA application that are outlined in this paper are addressed.